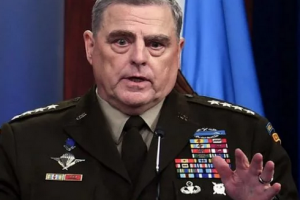 Chairman of Joint Chiefs warns of growth of al Qaeda, threat to US amid Taliban takeover of Afghanistan

FoxNews—Chairman of Joint Chiefs of Staff Gen. Mark Milley warned lawmakers during a briefing over the weekend that terror groups like al-Qaeda may be able to grow at a much faster pace and pose a threat to the United States in the wake of the Taliban takeover of Afghanistan, a source confirmed to Fox News.

The Associated Press first reported Monday that Milley, during a briefing with senators on Sunday, said U.S. officials were expected to alter their earlier assessments about the pace of terrorist groups rebuilding in Afghanistan.

Earlier this summer, the Pentagon’s top leaders warned that extremist groups, like al-Qaida and ISIS, could have the potential to regenerate in the region and pose a threat to the U.S. homeland within two years of the withdrawal of U.S. troops from Afghanistan.

But amid the worsening security situation in Afghanistan and the Taliban takeover, U.S. officials now believe terror groups may be able to grow at a much faster pace.

Last month, Milley warned that the Taliban had “strategic momentum” in the fight for control of… read more>>