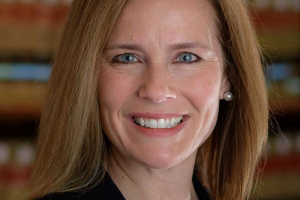 CNA—Following the death of U.S. Supreme Court Justice Ruth Bader Ginsburg on September 18, speculation on who President Donald Trump will nominate to replace the Justice has focused on Judge Amy Coney Barrett, who currently serves on the United States Court of Appeals for the Seventh Circuit.

Who is Amy Coney Barrett?

Feinstein:  “Why is it that so many of us on this side have this very uncomfortable feeling that dogma and law are two different things, and I think whatever a religion is, it has its own dogma. The law is totally different.

“And I think in your case, professor, when you read your speeches, the conclusion one draws is that the dogma lives loudly within you. And that’s of concern.”

Just over two weeks after she was confirmed to the Seventh Circuit Court of Appeals, Barrett was added to President Donald Trump’s list of potential Supreme Court picks, and was rumored to have been one of the finalists to replace Justice Anthony Kennedy upon his retirement.

Trump chose Justice Brett Kavanaugh to replace Justice Kennedy, but a report emerged in 2019 that Trump had said he was “saving” Barrett to fill a potential vacancy caused by the death or retirement of Justice Ginsburg, the oldest member of the court at the time.

With Justice Ginsburg’s death, Barrett is once again being discussed for the highest court in the country.

Born in New Orleans, the eldest of seven children, Barrett graduated from Rhodes College before receiving a full scholarship to Notre Dame Law School. Graduating first in her class from law school, she then clerked for Judge Laurence Silberman and Supreme Court Justice Antonin Scalia before going into private practice. She returned to Notre Dame Law School, taught classes in 2002, and became a professor in 2010.

Since Justice Ginsburg’s death, Barrett has been scrutinized for her Catholic faith and family size. Barrett and her husband have seven children, including two adopted from Haiti after the 2010 earthquake.

At the time of her last judicial nomination, criticism of Barrett focused on the size of her family and her Catholic faith, attracting pushback from some commentators and making the judge a popular figure among many Catholics.

Amid renewed scrutiny of Barrett’s personal life and beliefs, in advance of a possible Trump nomination, Princeton University Professor Robert George highlighted the anti-Catholic tropes again being used in criticism of the judge.

“One would have hoped that having brought shame on themselves last time, ” tweeted the Princeton professor, “and blunted their spear on Judge Barrett by attacking her religion, they would be more careful this time about exposing their bigotry to public view. But no.”

During Barrett’s previous judicial confirmation hearings, questions were also raised about Barrett’s association with the lay organization People of Praise.

Secular media has referred to People of Praise as a “cult,” and criticized the group for a practice— which has since been changed—that called leaders “heads” and “handmaidens,” both of which are terms referenced in Biblical passages.

The historical facts are that People of Praise was founded in 1971 as part of a “great emergence of lay ministries and lay movements in the Catholic Church,” following Vatican Council II, according to Bishop Peter Smith, a member of the organization.

The group began with 29 members who formed a “covenant,” which is an agreement— not an oath—to follow common principles, to give five percent of annual income to the group, and to meet regularly for spiritual, social and service projects.

Covenant communities—Protestant and Catholic—emerged across the country in the 1970s, as a part of the Charismatic Renewal movement in American Christianity.

While most People of Praise members are Catholic, the group is officially ecumenical; people from a variety of Christian denominations can join. Members of the group are free to attend the church of their choosing, including different Catholic parishes, Smith explained.

What will happen next?

On Monday President Trump announced that he expects to name his nominee for the Supreme Court by the end of the week, following memorial and funeral services for Justice Ginsburg.

Justice Ginsburg will lie in state at the National Statuary Hall of the U.S. Capitol on Friday, following two days of lying in repose at the Supreme Court on Wednesday and Thursday. The Justice will lie underneath the Portico, and the public will be permitted to view the casket outdoors.

As per tradition, Justice Ginsburg’s former law clerks will serve as her honorary pallbearers.

Justice Ginsburg will be buried in a private ceremony alongside her husband at Arlington National Cemetery.