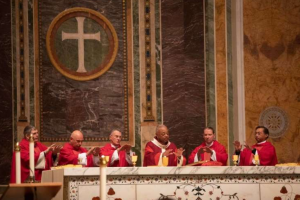 Washington D.C., Oct 7, 2019-CNA – The Archbishop of Washington, D.C. exhorted Supreme Court justices to “rejoice” in the Holy Spirit at the annual Red Mass on Sunday in D.C.

In his homily, celebrant Archbishop Wilton Gregory noted that “Saint Luke wrote the passage that we just heard saying that Jesus rejoiced in the Holy Spirit.”

“May each one of you rejoice in a spirit of integrity, courage, and wisdom each day of this new year of legal justice and human compassion,” he said to those in attendance, who included Chief Justice John Roberts and Associate Justices Stephen Breyer and Clarence Thomas, along with recently retired Justice Anthony Kennedy, Attorney General William Barr and Solicitor General Noel Francisco, according to SCOTUSBlog.

The annual Solemn Mass of the Holy Spirit at St. Matthew’s Cathedral in Washington, D.C. is celebrated at the beginning of the U.S. Supreme Court term. Commonly called the Red Mass, it takes its name from the liturgical red vestments that worn. Marking the beginning of the judicial year, God’s blessings are invoked for the upcoming term along with prayers for wisdom for the justices and other members of the civic and legal communities.

In his homily, Archbishop Gregory said that those “blessed” with the Holy Spirit “find reasons to take heart and comfort in facing the tasks that are theirs.” He asked “for a generous outpouring of God’s Holy Spirit upon all who serve us in the realm of our legal structures.”

The archbishop also exhorted those present to pray to the Holy Spirit for strength with “awareness of our human weaknesses.”

Sunday’s Mass kicked off a Supreme Court term that could cause substantial ripple effects on religious freedom and abortion laws in the U.S.

On Tuesday, the Court will hear oral arguments in a trio of cases—Bostock v. Clayton County, Altitude Express, Inc. v. Zarda, and Harris Funeral Homes v. EEOC—that will decide if federal laws prohibiting employment discrimination on basis of sex also apply to claims of discrimination on the basis of one’s sexual orientation or gender identity.

For decades, federal courts have applied the language of Title VII of the Civil Rights Act as it was written, recognizing that it protected against sex discrimination in the workplace but said nothing about sexual orientation or gender identity, or “SOGI” cases.

However, recent decisions in the Second and Seventh Circuit Courts of Appeals have interpreted Title VII to include protections against discrimination on the basis of sexual orientation or gender identity.

If the Court agrees and expands the scope of Title VII to include these protections, it could possibly open up religious employers to more anti-discrimination lawsuits and affect sex-specific policies in workplaces and a variety of organizations.

Such a change could mean that, for example, a homeless shelter might have sex-specific rooms to protect female abuse survivors from having to share a room with men. However, some public anti-discrimination ordinances have required shelters to accommodate men identifying as women, who request to share a room with women.

Other social services or jobs might require sex-specific employment policies as well, such as domestic violence counseling which would pair female counselors with vulnerable women who are victims of abuse.

Religious employers with codes of conduct in place may conflict with the lifestyle choices of some employees, and give rise to new cases under a revised interpretation of Title VII. Some Catholic schools require teachers to live their public and private lives in accordance with Church teaching, so as not to cause scandal to the community. If a teacher at such a school contracted a same-sex marriage in public violation of Church teaching, however, the school might be faced with the decision to terminate their employment—and thus invite an anti-discrimination lawsuit—or retain them in violation of the code of conduct.

Title VII allows religious organizations to give priority to potential hires who share the beliefs and mission of the organization, but the scope of its religious exemptions are still being debated in the courts.

The U.S. Conference of Catholic Bishops, in their own amicus brief, submitted with other religious groups in support of Harris Funeral Homes, stated that expanding Title VII protections to include “gender identity” could have a seismic effect on other conflicts outside of the workplace, and within religious institutions.

“Such an interpretation will affect the ability of churches and faith-based schools and charities to hire and retain employees who, by word and conduct, accept or at least do not contradict the church’s religious message,” the brief stated.

Another religious freedom case that the Court will hear this term involves a 19th-century “Blaine Amendment” statute in the State of Montana.

In 2015, the state enacted a scholarship program for students to attend a primary or secondary school, either private or public. However, the state constitution prohibits the appropriation of public funds “for any sectarian purpose.”

In the latter half of the 19th century, U.S. Congressman James Blaine led an effort to pass federal legislation barring taxpayer dollars from funding “sectarian” schools—which at the time targeted Catholic parochial schools, as the public school system was largely Protestant. Although Blaine’s legislation failed, many states, including Montana, enacted similar amendments to their constitutions.

The religious freedom issue at play in Espinoza v. Montana Dept. of Revenue is whether the state’s scholarship program can pay for students to attend religious schools. The Court’s decision could affect how similar amendments would apply in the future to the access of religious groups to publicly-funded programs such as historic preservation grants, school vouchers, and social services.

Last week, the Court also agreed to hear a challenge this term to Louisiana’s abortion law; the law required abortionists to have admitting privileges at local hospitals in case of complications arising from an abortion.

Louisiana’s law was struck down by a district court, but a panel of judges on the U.S. Fifth Circuit Court of Appeals overturned that decision, ruling 2-1 that the law would not result in the closure of abortion clinics as critics said it would, and thus its requirement would not create an unconstitutional “undue burden” upon women’s access to abortions in the state.

In February, the Court had issued a temporary stay on the law going into effect before it agreed last week to hear the challenge to the law.

The Supreme Court struck down most of Texas’ abortion law in the 2016 decision Whole Woman’s Health v. Hellerstedt; the Fifth Circuit panel of judges acknowledged that ruling but drew distinctions between Texas’ abortion law and Louisiana’s. If the Court upholds this ruling, it could create some space for certain state regulations of abortion clinics in the future.