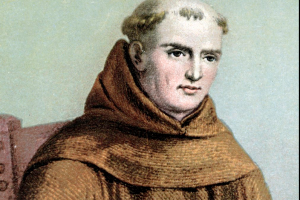 Newsweek—(reporting includes a video that will make your heart cry—CBJ ed.)  A California city council voted unanimously to remove a statue of a Spanish priest who Pope Francis had canonized.

The Ventura City Council cast a 6–0 vote during its meeting Wednesday night to remove a statue of Father Junipero Serra from outside its city hall and relocate it to the Mission San Buenaventura.

A wooden statue of Serra located inside City Hall will also be relocated.

Pope Francis declared Serra a saint in 2015—the first canonization on U.S. soil. Serra led the Catholic Church’s missionary efforts among Native Americans on the West Coast during the 18th century.

But critics have long held that Serra was part of an imperial conquest that beat and enslaved Native Americans. (A completely fabricated narrative now taught in our public schools and even some Catholic schools who use secular social studies and history textbooks instead of the engaging history textbooks produced by Catholic Textbook Project and currently used in Catholic schools in more than 100 dioceses and in international English-speaking pockets around the world—ed., Catholic Business Journal)

Calls to remove statues of Serra around California grew in June amid Black Lives Matter protests following the deaths of several unarmed Black men while in police custody. (what? the story keeps changing… at first is was triggered by the obvious and outrageous police brutality in the arrest of criminal and “high” George Floyd in Minnesota—ed., Catholic Business Journal)   The protests sparked a national reckoning of sorts over traditions and behavior deemed racist by many, including the preservation of …. read more (the gist of the rest of the story is good although of course you’ll have to ignore the biased mis-represenation of the FACTS, the failure to mention the nationwide escalation of black-on-black crime, shootings and murder, in addition to the complete failure to mention that at least one black policeman was killed by the recent, reckless, mindless, Marxist-style rioting and looting  —ed, Catholic Business Journal)…>>