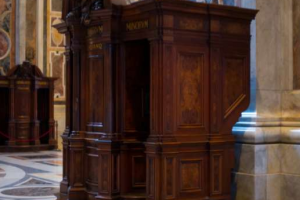 Seal of confession is an ‘intrinsic requirement,’ Vatican says

The head of the Vatican’s Supreme Tribunal of the Apostolic Penitentiary released a note Monday reaffirming the inviolability of the seal of confession and the importance of other forms of secrecy in the life of the Church.

The text follows action by governments in Australia, California, and other parts of the world, to undermine the sacramental seal.

“The defense of the sacramental seal and the sanctity of confession can never constitute some form of connivance with evil, on the contrary, they represent the only true antidote to evil that threatens man and the whole world,” states the note signed by the head of the penitentiary, Cardinal Mauro Piacenza July 1.

The Apostolic Penitentiary is responsible for dealing with cases related to the internal forum, and for processing certain reserved cases under the seal of confession.

The Catholic Church declares that every priest who hears confessions is obliged, under the severest legal penalties, to keep absolute secrecy concerning everything learned in the context of sacramental confession.

Violation of the seal by a priest is punishable by an automatic excommunication, and can be augmented with other penalties, including dismissal from the clerical state.

In May California’s state senate introduced a bill that would require priests to violate the seal if they had knowledge or suspicion of child abuse gained from hearing the sacramental confessions of other priests or co-workers.

A report by a Royal Commission set up to examine child sexual abuse in Australia recommended similar laws in that country last year.

Priests and bishops, both in the United States and Australia, have repeatedly stated they will not violate the sacramental seal, even if it results in them being sent to prison.

“The secrecy of confession is not an obligation imposed from the outside, but an intrinsic requirement of the sacrament and as such it cannot be dissolved even by the penitent himself,” Piacenza explained after the note’s publication.

“It concerns the protection of the same sacrament, instituted by Christ to be a safe haven of salvation for sinners. Should the trust in the seal fail, the faithful would be discouraged from accessing the sacrament of Reconciliation, and this, obviously, with serious harm to souls,” he said.

The note from the Apostolic Penitentiary also concerned the expectations of secrecy which relate to the non-sacramental “internal forum,” including spiritual direction, that exists outside of the sacrament of penance.

While drawing a distinction between the sacramental seal and the necessary confidentiality of the internal forum in other matters, Piacenza noted that various provisions in canon law exist to protect privileged spiritual relationships.

In the process of formation in seminaries, for example, spiritual directors are prevented from voting on the suitability of candidates who are their directees.

“In these cases the canon law guarantees a special confidentiality to the spiritual conversation, which involves the most intimate and personal sphere of the faithful in order to listen and to discern the will of God,” Piacenza explained.

The concept of the pontifical secret was also addressed in the note, which reaffirmed the confidentiality of information related to the governance of the Holy See.

Piacenza said that it remained at the discretion of the Vatican – and not a person’s individual judgment – to determine which internal information was covered by the secret and which was not.

“The use of information that does not fall under the seal, can and must be correctly interpreted by the Apostolic See alone, in the person of the Roman Pontiff, whom Christ the Lord constituted and placed as a visible principle and foundation of the unity of faith and communion of the whole Church,” the document states.

The limits of the application of the pontifical secret have been the subject of some debate over the last year. Former apostolic nuncio Archbishop Carlo Maria Vigano released a series of letters in 2018 related to the Vatican’s handling of accusations made against former cardinal Theodore McCarrick. Vigano has asserted that the pontifical secret cannot be invoked to prevent the disclosure of immoral actions or circumstances.

Since that time, other former or serving members of the Vatican’s diplomatic service have stated that the pontifical secret has been invoked to try to prevent subordinates reporting misconduct by their superiors.

During the pope’s recent summit on clerical sexual abuse, several prominent participants noted the potential for abuse of the pontiifical secret, with Cardinal Reinhard Marx and Cardinal Blase Cupich both calling for clarification on the application of pontifical secrey in the light of civil reporting requirements.

Cardinal Piacenza stressed that “the text of the Note cannot and will not be in any way a justification or a form of tolerance for the abominable cases of abuse perpetrated by members of the clergy.”

“No compromise is acceptable in promoting the protection of minors and vulnerable people and in preventing and combating all forms of abuse, in the spirit of what was constantly reiterated by Pope Francis and recently regulated by the Motu Proprio Vox estis lux mundi,” he said.

The cardinal quoted Pope Francis’ recent comments on the seal of confession in March 2019:

“Reconciliation itself is a good that the wisdom of the Church has always safeguarded with all its moral and juridical strength with the sacramental seal. It, although not always understood by the modern mentality, is indispensable for the sanctity of the sacrament and for the penitent’s freedom of conscience,” Francis said.

Piacenza explained that the pontifical secret “has as its ultimate purpose the public good of the Church and the salus animarum” and was a necessary protection for all concerned in some cases.

The Vatican document also cautioned against a media culture which can produce a “negative prejudice against the Catholic Church” and lead to an unjust approach to reporting.

“Even among believers, frequently, precious energies are employed in the search for ‘news’ – or real ‘scandals’ – suited to the sensitivity of certain public opinion, with aims and objectives that certainly do not belong to the theandric nature of the Church,” the penitentiary note states.

“Invoking the judgment of public opinion as the last tribunal, information of all kinds is made known too often, also concerning the most private and confidential spheres, which inevitably touch the life of the Church, induce – or at least favor – rash judgments unlawfully and irreparably damage the good reputation of others,” it continues.

Piacenza said there is a need to “relearn the power of speech” in an age where the irresponsible use of mass communication can cause real injustice to individuals.

“As regards the other areas of communication, both public and private… the wisdom of the Church has always indicated as a fundamental criterion the “golden rule” pronounced by the Lord and reported in the Gospel of Luke: ‘Do to others as you would have them do to you,’” the text says.

“In this way, in the communication of truth, as in silence with regard to it when the questioner had no right to know it, it is always necessary to conform one’s life to the precept of fraternal love, having the good and safety of others before his eyes, respect for private life and the common good.”