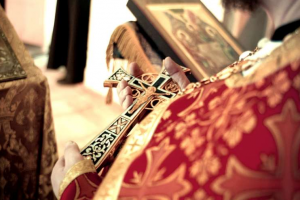 St. Vladimir died of old age in 1015, but his modern-day statue in Canada met a much more gruesome end.

The rector of Sts Volodymyr and Olga Cathedral in Winnipeg said he is “devastated” after a statue of St. Vladimir was found decapitated Tuesday.

The head, along with pieces of the statue’s staff, are still missing, church officials told the CBC.

Fr. Michael Buyachok is pastor of the cathedral of the Ukrainian Archeparchy of Winnipeg. The statue was a landmark of the parish, beloved by parishioners, and created by a local sculptor, Buyachok told the CBC.

“It’s a tragic event, because the statue symbolizes something for us. Our congregation, they know the statue from memory. But that’s the way it is,” he said.

It’s especially devastating because the statue had been blessed by St. John Paul II during his visit to Winnipeg in 1984, Buyachok added.

Police have been informed of the incident, which they described as vandalism and theft, they told CBC.

St. Vladimir the Great, Grand Prince of Kiev, is venerated for being baptized in 988, which resulted in the Christianization of Kievan Rus’, a state whose heritage Ukraine, Russia, and Belarus all claim.

Who was the vandal and thief?

It is yet unclear who cut off and stole the head of the statue and parts of the staff. Church officials said nearby residents of a nursing home reported teenagers playing around the statue on Monday night, while residents of an apartment complex behind the statue reported hearing a grinding sound early Tuesday morning, they told the CBC.

“I really couldn’t tell you. I think it’s just vandalism, straight vandalism,” Buyachok told the CBC. “They wouldn’t have anything against the cathedral, because the statue’s been there for years, since 1984.”

The church has informed local metal scrappers of the incident, in case they are sold the head or staff.

Buyachok said he just hoped the pieces would be returned.

“I would just simply tell them, just return the head to us. We won’t prosecute you,” he said. “Let those that prosecute people, let them do that. But we won’t do anything to you, because what’s the point?”