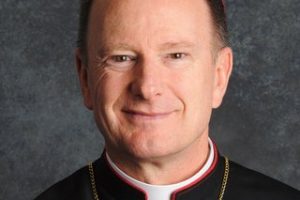 Bishop Barber: No Priest can comply with proposed CA law… I would rather go to jail rather than obey this attack on our religious freedom

If you know or have ever met or heard Bishop Barber, you know immediately he is a man of clear direction and purpose, a straight-shooter in his words and actions.  After all, not only is he a well-formed Jesuit, he is also a military chaplain.  You don’t have time for anything else but clarity, truth and action on the battlefield.  So is true in the current battle raging in the great state of California, as the news below reveals.


CNA—Bishop Michael Barber, S.J., of the Diocese of Oakland, California, has said he would sooner accept arrest and prison than comply with a state law that would force priests to violate the seal of confession. Barber made the statement in a letter released to the diocese on Tuesday.

“I will go to jail before I will obey this attack on our religious freedom,” wrote Barber.

“Even if this bill passes, no priest may obey it. The protection of your right to confess to God and have your sins forgiven in total privacy must be protected. I urge you to contact your State Senator today to protest this bill.”

The bishop said he is entirely in favor of laws that protect children from abuse, and supports the work undertaken by the Church to ensure the safety of minors. But, he insisted, this support does not extend to Senate Bill 360, a proposed state law which would force priests and other religious ministers to report suspected cases of child abuse in volation of priest-penitent privilege.

Barber said that a local priest had come forward to tell him his teenage parishioners were now afraid to receive the sacrament of reconciliation out of fear the priest would go to the police with their sins. He called the bill “misguided,” and said it “does nothing to support our efforts” to promote safe environments.

The bill passed the California Senate on Thursday by an overwhelming margin, with legislators voting 30-2 in favor of the measure.

In a statement after that vote, Los Angeles Archbishop Jose Gomez said he was “deeply disappointed” by the result and that, even with the amendments that had been made to it before the vote it “still denies the sanctity of confession to every priest in the state and to thousands of Catholics who work with priests in parishes and other Church agencies and ministries.”

The senator has claimed that such abuse has been revealed through “recent investigations by 14 attorneys general, the federal government, and other countries.”

Despite recent investigations into the clerical sexual abuse crisis in different countries and jurisdictions, no data exists establishing or indicating the use of sacramental confession either to facilitate or perpetuate the sexual abuse of minors.

Per Canon Law, priests who violate the seal of confession by sharing anything learned within the sacramental context to anyone, at any time, for any reason is subject to automatic excommunication and and further punishments, including loss of the clerical state.