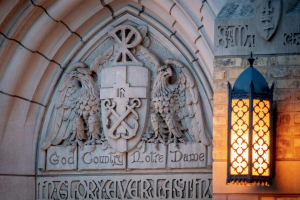 Sycamore Trust—Most readers know that President Biden was not this year’s Notre Dame Commencement speaker, but many may not know that Father Jenkins did invite him. The White House disclosed the invitation, dissembling as to the reason, while the University refused to comment.

What follows is an account of this episode and the dozens of reports attributing Biden’s dodging the invitation to concern about a pro-life backlash, a concern raised by Sycamore Trust’s Open Letter to Father Jenkins signed by almost 5,000 alumni, parents, students, and others of the Notre Dame family.

Upon learning from an interview of Father Jenkins that he was considering inviting Biden to be Notre Dame’s 2021 Commencement speaker, we published a series of bulletins describing Biden’s hostility to fundamental Church teachings. See here and here and here. And we invited Notre Dame alumni and others of the Notre Dame family to sign an Open Letter to Father Jenkins urging him not to issue the invitation.

Catholic institutions should not honor those who act in defiance of our fundamental moral principles.

“Biden is such a person writ large,” our letter continued.

He rejects Church teachings on abortion, marriage, sex and gender and is hostile to religious liberty. He embraces the most pro-abortion and anti-religious liberty public policy program in history. The case against honoring him is immeasurably stronger than it was against honoring President Obama, an action that alienated countless Catholics and brought upon Notre Dame the harsh criticism of 83 cardinals, archbishops and bishops.

After a very long delay, the University announced the Commencement speaker, and it was not Biden.

In the past, Notre Dame announced its speaker in March, occasionally in early April. This time, March passed, and then April, with no word but much speculation about Biden.

Finally, a scant twelve days before Commencement, the University announced that the speaker would be Jimmy Dunne, a financier and Notre Dame trustee.

Biden’s absence was “no loss,” reported Wall Street Journal editor-at-large Gerard Baker, who was at Notre Dame for the graduation of his daughter.

Jimmy Dunne, a former principal of investment bank Sandler O’Neill, talked movingly about what he had learned of service and duty that day when almost half of his staff were killed in the terrorist attacks on Sept. 11, 2001. Then Carla Harris, a top executive at Morgan Stanley and perhaps the most successful black woman on Wall Street, gave a spellbinding oration on her receipt of the university’s Laetare Medal that shook down the very thunder from the sky in its inspirational élan.

The Biden Invitation, its Declination, and White House Dissembling

While the university… read more