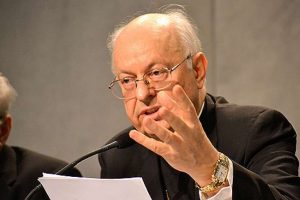 Vatican City (CNA) – The secretary general of an upcoming synod of bishops said Monday he thinks the abuse scandal in the Catholic Church will not be a hindrance to the success of the meeting. He also criticized the recent decision of an American archbishop to publish a theologian’s critique of the synod’s working document.

“I do not think [the abuse crisis] is an impediment,” said Cardinal Lorenzo Baldisseri, but that it is perhaps a “providential opportunity… to show to young people and everyone else what the Church is.”

Speaking just two days before the start of the assembly on young people, faith, and vocational discernment, Baldisseri said young people are intelligent and often speak openly and honestly and that he believes they understand “human frailty.”

The cardinal raised questions about Archbishop Charles Chaput of Philadelphia’s publication last month of an anonymous theological critique of the instrumentum laboris, or working document, of the synod.

The critique was published Sept. 21 at the website of the journal First Things. It was presented by Chaput, who withheld the author’s name, but referred to him as a “respected North American theologian.”

Shortly after its publication, Cardinal Blase Cupich of Chicago wrote to First Things, expressing concern about “the problematic nature of some forms of anonymity,” and asking why First Things had chosen to publish an unsigned critique, even one proffered by Chaput.

In response, Chaput said of the “the anonymous nature of the critique: I certainly agree with the cardinal that unnamed sources can be regrettable. So is the toxic environment in many of our academic communities that makes them necessary.”

While Baldisseri did not name Chaput directly, he said during his press conference that “the person in question” is a member of the synod’s planning council and was in attendance when the text was presented.

Chaput was one of 15 members of the council that drafted the instrumentum laboris and because of that role, will participate in the synod as an ex officio member.

“If he had some objections, he could have demonstrated them; we would have inserted them, calmly,” Baldisseri said of Chaput.

“I do not understand because then, afterwards, he makes a declaration.”

Baldisseri also answered a question at the press conference about the decision by some bishops to not attend the Synod. Pointing to Cardinal Tobin, who said last month he needs to be present in his diocese during “this time of crisis,” he noted those bishops who “cannot come” are free to appoint substitutes to go in their place.

The synod will run Oct. 3-28. According to Baldisseri, the general sessions are expected to take about the first two weeks, with the last week and half comprised of meetings of small working groups organized according to language.

Baldisseri’s press conference also presented an instruction from the General Secretariat of the Synod of Bishops on regulations for the celebration of synod assemblies and the work Secretariat.

The instruction implements the direction of article 26 of Episcopalis communio, the apostolic constitution published last month, and is to be read in connection with that document, said Bishop Fabio Fabene.