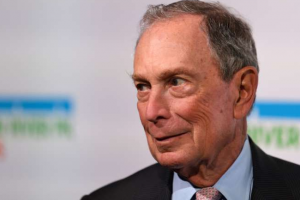 In a video clip of a 2011 interview with TechCrunch, Bloomberg—billionaire founder of the news and financial services company Bloomberg L.P. and former mayor of New York City—gave his recipe for workplace success. He advised employees against taking lunch breaks and even suggested they should avoid going to the bathroom. The video was repeatedly shared on social media last week and viewed thousands of times.

“I’m not smarter than anybody else, but I can outwork you,” Bloomberg said of his work ethic.

“My key to success—for you or for anybody else—is make sure you’re the first one in there every day, and the last one to leave. Don’t ever take a lunch break or go to the bathroom, you keep working. You never know when that opportunity is going to come along,” he said.

In 2013 on his radio show, Bloomberg gave similar advice in telling workers to “take the fewest vacations and the least time away from the desk to go to the bathroom or have lunch.”

On Feb 14., leaders at a Catholic business school responded that prayerful prudence is key to achieving a proper work-life balance, which is necessary to workplace success.

“I hope that when he said that, Bloomberg was exaggerating for effect,” says Professor Andrew Abela, founding dean of the Busch School of Business at the Catholic University of America.

“Hard work is necessary, but time for prayer, family, friends, community are absolutely necessary too, not just for a life well lived, but for a successful career as well,” Abela said.

Professor Maximilian B. Torres, J.D., who teaches business ethics and organizational behavior at the Busch School, said that as a father of eight with a spouse of 30 years, he believes a work-life “balance” can be fluid and depend upon the situations at work and at home.

“Ultimately, balance lies in the counsels of prudence, and results from prayer,” Torres said.

In the 2011 TechCrunch interview, Bloomberg did go on to say that success is not all about money.

“We measure success by, ‘how much money do you have?’ That’s not the only measure of success. I know some very successful people who measure it by how many lives they’ve saved, or how many kids they’ve helped in the classroom, or how well they’ve brought up their children,” Bloomberg said.

He said of his time in “public service” as mayor of New York City that he hoped he could one day tell his grandchildren, “I’ve left you a better world.”

The company’s building in midtown Manhattan offers free pantry food and free soup at lunchtime to employees in a central location, he noted—although it is unclear whether such policies were instituted to take care of employees or to maximize worker productivity.

Ultimately, 65 women were claimants in the lawsuit which was dismissed by a federal judge in 2011. The judge concluded there was a lack of evidence that the company engaged in a “pattern” of discrimination.

The New York Post reported in December 2019 that Bloomberg, L.P., had been the subject of nearly 40 discrimination and harassment lawsuits by 64 former employees.

According to a November report by the New York Times, one of the lawsuits alleged that Bloomberg told a pregnant employee “kill it,” referring to her baby, and complained about the number of pregnant women at the company. That lawsuit was settled without an admission of guilt.

On Friday, the Washington Post reported that a former Bloomberg technology writer said he witnessed the conversation in which Bloomberg allegedly told the pregnant employee to kill her baby.

Other lawsuits have also alleged that Bloomberg made disparaging remarks about pregnant employees.