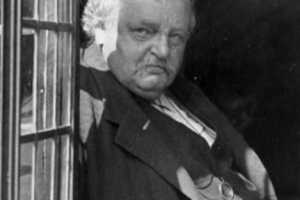 For those who have experienced the joy of savoring any writing by G.K. Chesterton (photo, left), the following Crisis article is for you—ed.   Crisis Magazine—…I’ve called Chesterton “The Apostle of Common Sense.” I’d also like to call him “The Apostle of Life.” In his fantastical novel The Man Who Was Thursday, Chesterton says that modern philosophers hate life itself. In his book St. Thomas Aquinas, Chesterton says that the Church is always on the side of life. In other words, he identified the Church’s battle with the Culture of Death long before St. John Paul II gave our time its official epithet.

But what is the Culture of Life? For that matter, what is life? Chesterton tells us: life is a gift. Life is freedom. Life is a fight.

As a young man, Chesterton, like so many other young people, experienced a deep depression that brought him to the brink of self-destruction. He was only saved, he says, “by clinging to one thin thread of thanks.” He realized that existence is better than non-existence, and that existence is not something we’ve earned. We can only respond to such a gift the way we respond to any gift: by accepting it with gratitude, by being thankful.

“The greatest kind of giving,” he declares, “is thanksgiving.” It puts one in a permanent position of humility. It banishes pride, which is chief of the sins—the sin that not only ruins all the virtues, but even ruins the other sins.

In the Mass, we hear the priest say, “We do well always and everywhere to give you thanks…” Indeed, we do—or, at any rate, we would. It would save us from losing our … Read more>>