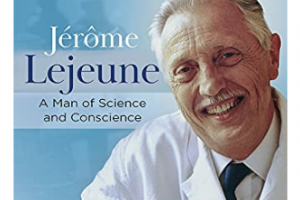 French pediatrician and geneticist Jérôme Lejeune, renown for discovering the extra chromosome that causes Down syndrome, was a devout Catholic. As a Catholic, Lejeune thought his historic discovery would lead to a more compassionate approach to children with the syndrome.  Instead—to his horror—Lejeune’s famous discovery became a tool used to diagnose Down Syndrome babies in the womb and abort them.

This horror led Lejeune to become a pro life expert and advocate who used his remarkable scientific knowledge to defend the unborn and to testify as an expert on their behalf in court cases around the world, including in the United States.  As a result, he endured having his name “buried” and his discovery obscured by an unimaginable horror.

The book. Jérôme Lejeune, a Man of Science and Conscience, by Aude Dugast, takes readers on an incredible journey of this man’s life, one featuring Nobel Peace Prize nominations, a close friendship with Pope John Paul II, hundreds of prestigious 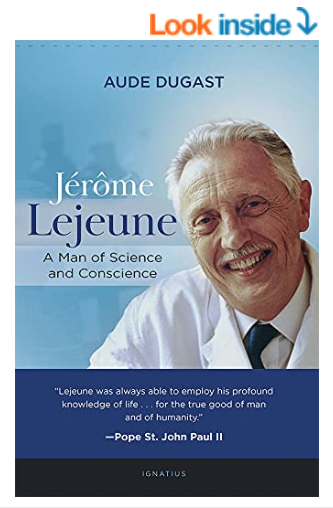 accolades, and a will to serve patients whom society deemed worthless, namely, those with Down syndrome.

Author Dugast, herself an important French academic, was also Lejeune’s disciple and the postulator of his cause for beatification. She spent 11 years consulting thousands of archives, met at length with Lejeune’s wife and relatives and with families of his patients, as well as with his French and foreign collaborators.

The book’s editor describes Dugast’s recount, saying her book “delivers a page-turner of unbelievable events of this man’s life, his relentless pursuit of truth through both faith and science, and courage to speak on behalf of the preborn child to his colleagues who shunned him for such action.”

Lejeune was a man of deep faith and insatiable love for those with Down syndrome. He dedicated his life to giving their lives dignity and, ultimately, to find a cure, which he was never able to accomplish. His work caught the attention of Pope John Paul II, with whom he developed both a lifelong friendship and working relationship, eventually serving as the head of the Pontifical Academy for Life.

“Lejeune was always able to employ his profound knowledge for life… for the true good of man and of humanity,” noted Pope St. John Paul II.

In 1969, Lejeune’s work earned him the William Allan Award, granted by the American Society of Human Genetics, the world’s highest honor in genetics.

After receiving the Allan prize, Lejeune gave a talk to his colleagues which concluded by explicitly questioning the morality of abortion, an unpopular viewpoint in the profession. In a letter to his wife, Lejeune wrote “today, I lost my Nobel prize in Medicine.”

In 1975, after one of his public appearances in Paris on the beginning of life, Lejeune met Wanda Półtawska, director of the Catholic Institute for the Family in Kraków. Later that year, Półtawska contacted Lejeune to speak at conferences on the beginning of life which she organized with one of her close friends, Monsignor Karol Wojtyla, then Cardinal-Archbishop of Krakow. On October 16, 1978 Wojtyla was elected Pope John Paul II.

Lejeune regularly traveled to Rome to meet with the Pope, attend meetings of the Pontifical Academy of Sciences, and participate in other church events, such as the 1987 Synod of Bishops. The Pope wanted to name Lejeune as the president of a new pontifical academy that was dear to his heart: the Pontifical Academy for Life.[21] Lejeune painstakingly drafted its bylaws and the oath of the Servants of Life that each member of the Academy must take.

Lejeune was diagnosed with lung cancer in November 1993. He served as president of the Academy for only a few weeks before his death in April 1994.

A few years later, during his visit to Paris for World Youth Day 1997, John Paul II visited Lejeune’s grave in Châlo-Saint-Mars. Lejeune has been named “Servant of God”, and his cause for sainthood is being postulated by the Abbey of Saint Wandrille in France.

The cause for beatification for Lejeune was initiated on June 28, 2007.  He was declared Venerable by Pope Francis on 21 January 2021.

in part culled from an article by Alejandro Bermudez, with CNA.