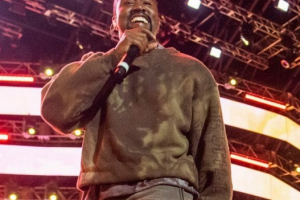 Out of the Mouth of Rappers: Kayne West and more

Speaking to more than 10,000 people at the Gateway Center in downtown Salt Lake City,  Super Star Rapper Kanye West left no doubt what’s important to him in life.

For those less enamoured (or familiar) with the rapper beat and culture, West underscored inspiring Christian and common-sense — seriously common sense — points, expressed his way, that included:

“Jesus walks, God show me the way because the devil’s tried to break me down,” West rapped. “The only   thing that I pray is that my feet don’t fail me now.”

“I’ve seen him work miracles in my life,” West said. “You know the devil presents so many flashy, shiny objects. I’ve seen everything that the devil could’ve showed you via TV, videos, car dealerships, jewelry, houses, and I’ll tell you …”

The recording artist launched into song: “Nothin’ beats God … and a sound mind.”

West encouraged those in the crowd to not allow the opinions or “validation of men” to drive the choices they make.

“I know we say, ‘This is the culture, that’s the culture.’ To be radically in service to Christ is the only culture that I want to know about,” West said, drawing loud cheers from those assembled.

Catholic Rapper John Levi has more than 1.8K “thumbs up” on his YouTube video featuring a song from his Blynd Syght Album. The song is named “Real Presence” and yes, it is about the Holy Eucharist.

Some of his lyrics include:

Catholic Rapper and seminarian Nicole C, whose creates music under the name Communion is another example of an unsuspecting source of faith and common sense.

i Believe
Lyrics written by: Communion

I believe in God, the Lord, the Almighty
Who embraces the leper of society
Gives sight to the blind with clay that He’s spit in,
And says, ‘Rise and walk, your sins are forgiven’

I believe our mission is to care for the homeless
And bring the Good news to all of the hopeless
It’s our responsibility, not merely sage advice
In every poor person is the face of Christ

CHORUS
I believe that Jesus is the Way
For a better tomorrow and today
Throw your hands up in the air and lift your voice
And say, ‘I believe in Jesus and rejoice’

2nd Verse
I believe in you and me and in all humanity
I believe in G.O.D., maker of the galaxy
I believe this human race can start to see better days
If we only place our faith in the Lord and change our ways

3rd Verse
Man deciding for himself right and wrong is nonsense
I believe in the law written in our conscience
I believe in the return of Christ in glory and power
Stay awake, ’cause we know neither the day nor the hour

So, uh, what have you (and we) done for God lately in OUR line of work or profession?