Memorial of Saints Cosmas and Damian 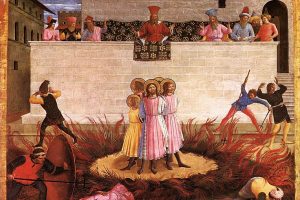 1 Praise the LORD! Sing to the LORD a new song, his praise in the assembly of the faithful! 2 Let Israel be glad in his Maker, let the sons of Zion rejoice in their King! 3 Let them praise his name with dancing, making melody to him with timbrel and lyre! 4 For the LORD takes pleasure in his people; he adorns the humble with victory. 5 Let the faithful exult in glory; let them sing for joy on their couches. 6 Let the high praises of God be in their throats and two-edged swords in their hands, 9 to execute on them the judgment written! This is glory for all his faithful ones. Praise the LORD!

7 Now Herod the tetrarch heard of all that was done, and he was perplexed, because it was said by some that John had been raised from the dead, 8 by some that Eli’jah had appeared, and by others that one of the old prophets had risen. 9 Herod said, “John I beheaded; but who is this about whom I hear such things?” And he sought to see him.

Reflection for the day: “Nothing seems tiresome or painful when you are working for a Master who pays well; who rewards even a cup of cold water given for love of Him.” — St. Dominic Savio