Feast of the Transfiguration of the Lord 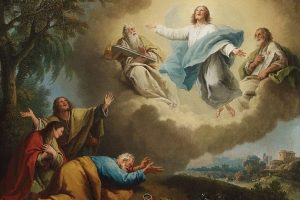 
1 The LORD reigns; let the earth rejoice; let the many coastlands be glad! 2 Clouds and thick darkness are round about him; righteousness and justice are the foundation of his throne. 5 The mountains melt like wax before the LORD, before the Lord of all the earth. 6 The heavens proclaim his righteousness; and all the peoples behold his glory. 9 For thou, O LORD, art most high over all the earth; thou art exalted far above all gods.


16 For we did not follow cleverly devised myths when we made known to you the power and coming of our Lord Jesus Christ, but we were eyewitnesses of his majesty. 17 For when he received honor and glory from God the Father and the voice was borne to him by the Majestic Glory, “This is my beloved Son, with whom I am well pleased,” 18 we heard this voice borne from heaven, for we were with him on the holy mountain. 19 And we have the prophetic word made more sure. You will do well to pay attention to this as to a lamp shining in a dark place, until the day dawns and the morning star rises in your hearts.

Reflection for the day: “By His loving foresight, He allowed them to taste for a short time, the contemplation of eternal joy, so that they might bear persecution bravely.” — St. Bede the Venerable