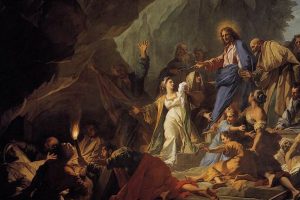 
1 In the beginning of the reign of Jehoi’akim the son of Josi’ah, king of Judah, this word came from the LORD, 2 “Thus says the LORD: Stand in the court of the LORD’s house, and speak to all the cities of Judah which come to worship in the house of the LORD all the words that I command you to speak to them; do not hold back a word. 3 It may be they will listen, and every one turn from his evil way, that I may repent of the evil which I intend to do to them because of their evil doings. 4 You shall say to them, `Thus says the LORD: If you will not listen to me, to walk in my law which I have set before you, 5 and to heed the words of my servants the prophets whom I send to you urgently, though you have not heeded, 6 then I will make this house like Shiloh, and I will make this city a curse for all the nations of the earth.'” 7 The priests and the prophets and all the people heard Jeremiah speaking these words in the house of the LORD. 8 And when Jeremiah had finished speaking all that the LORD had commanded him to speak to all the people, then the priests and the prophets and all the people laid hold of him, saying, “You shall die! 9 Why have you prophesied in the name of the LORD, saying, `This house shall be like Shiloh, and this city shall be desolate, without inhabitant’?” And all the people gathered about Jeremiah in the house of the LORD.


4 More in number than the hairs of my head are those who hate me without cause; mighty are those who would destroy me, those who attack me with lies. What I did not steal must I now restore? 7 For it is for thy sake that I have borne reproach, that shame has covered my face. 8 I have become a stranger to my brethren, an alien to my mother’s sons. 9 For zeal for thy house has consumed me, and the insults of those who insult thee have fallen on me. 13 But as for me, my prayer is to thee, O LORD. At an acceptable time, O God, in the abundance of thy steadfast love answer me.


19 And many of the Jews had come to Martha and Mary to console them concerning their brother. 20 When Martha heard that Jesus was coming, she went and met him, while Mary sat in the house. 21 Martha said to Jesus, “Lord, if you had been here, my brother would not have died. 22 And even now I know that whatever you ask from God, God will give you.” 23 Jesus said to her, “Your brother will rise again.” 24 Martha said to him, “I know that he will rise again in the resurrection at the last day.” 25 Jesus said to her, “I am the resurrection and the life; he who believes in me, though he die, yet shall he live, 26 and whoever lives and believes in me shall never die. Do you believe this?” 27 She said to him, “Yes, Lord; I believe that you are the Christ, the Son of God, he who is coming into the world.”

Reflection for the day: “Faith in the Resurrection of Jesus says that, there is a future for every human being; the cry for unending life, which is a part of the person, is indeed answered.” — Pope Emeritus Benedict XVI