Wednesday of the 11th Week in Ordinary Time 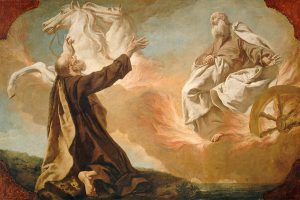 
1 Now when the LORD was about to take Eli’jah up to heaven by a whirlwind, Eli’jah and Eli’sha were on their way from Gilgal. 6 Then Eli’jah said to him, “Tarry here, I pray you; for the LORD has sent me to the Jordan.” But he said, “As the LORD lives, and as you yourself live, I will not leave you.” So the two of them went on. 7 Fifty men of the sons of the prophets also went, and stood at some distance from them, as they both were standing by the Jordan. 8 Then Eli’jah took his mantle, and rolled it up, and struck the water, and the water was parted to the one side and to the other, till the two of them could go over on dry ground. 9 When they had crossed, Eli’jah said to Eli’sha, “Ask what I shall do for you, before I am taken from you.” And Eli’sha said, “I pray you, let me inherit a double share of your spirit.” 10 And he said, “You have asked a hard thing; yet, if you see me as I am being taken from you, it shall be so for you; but if you do not see me, it shall not be so.” 11 And as they still went on and talked, behold, a chariot of fire and horses of fire separated the two of them. And Eli’jah went up by a whirlwind into heaven. 12 And Eli’sha saw it and he cried, “My father, my father! the chariots of Israel and its horsemen!” And he saw him no more. Then he took hold of his own clothes and rent them in two pieces. 13 And he took up the mantle of Eli’jah that had fallen from him, and went back and stood on the bank of the Jordan. 14 Then he took the mantle of Eli’jah that had fallen from him, and struck the water, saying, “Where is the LORD, the God of Eli’jah?” And when he had struck the water, the water was parted to the one side and to the other; and Eli’sha went over.


19 O how abundant is thy goodness, which thou hast laid up for those who fear thee, and wrought for those who take refuge in thee, in the sight of the sons of men! 20 In the covert of thy presence thou hidest them from the plots of men; thou holdest them safe under thy shelter from the strife of tongues. 23 Love the LORD, all you his saints! The LORD preserves the faithful, but abundantly requites him who acts haughtily.

Reflection for the day: “The moment has come when you should more than ever die to all that is not God, that you may the more lovingly commune with Him alone. Let your life be as hidden as possible. Lock yourself up in the great sanctuary of the divine Heart, for there the soul is nourished by her divine Spouse with that wine which strengthens, vivifies, inflames the soul, and causes her to take flight to the contemplation of the supreme Monarch; it is in that sanctuary that the soul learns the science of the saints, which is taught only to the humble.” — St. Paul of the Cross