Tuesday of the 2nd Week of Easter 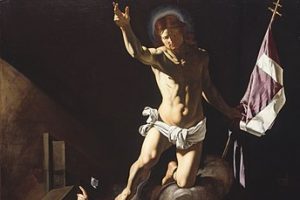 
32 Now the company of those who believed were of one heart and soul, and no one said that any of the things which he possessed was his own, but they had everything in common. 33 And with great power the apostles gave their testimony to the resurrection of the Lord Jesus, and great grace was upon them all. 34 There was not a needy person among them, for as many as were possessors of lands or houses sold them, and brought the proceeds of what was sold 35 and laid it at the apostles’ feet; and distribution was made to each as any had need. 36 Thus Joseph who was surnamed by the apostles Barnabas (which means, Son of encouragement), a Levite, a native of Cyprus, 37 sold a field which belonged to him, and brought the money and laid it at the apostles’ feet.


7 “Do not marvel that I said to you, `You must be born anew.’ 8 The wind blows where it wills, and you hear the sound of it, but you do not know whence it comes or whither it goes; so it is with every one who is born of the Spirit.” 9 Nicode’mus said to him, “How can this be?” 10 Jesus answered him, “Are you a teacher of Israel, and yet you do not understand this? 11 Truly, truly, I say to you, we speak of what we know, and bear witness to what we have seen; but you do not receive our testimony. 12 If I have told you earthly things and you do not believe, how can you believe if I tell you heavenly things? 13 No one has ascended into heaven but he who descended from heaven, the Son of man. 14 And as Moses lifted up the serpent in the wilderness, so must the Son of man be lifted up, 15 that whoever believes in him may have eternal life.”

Reflection for the day: There is nothing colder than a Christian who is not concerned about the salvation of others . . . Do not say, I cannot help others: for, if you are truly a Christian it is impossible not to. “Natural objects have properties that cannot be denied; the same is true of what I have just said, because it is the nature of a Christian to act in that way. Do not offend God by deception. If you said that the sun cannot shine, you would be committing an offense against God and making a liar of Him. It is easier for the sinner to shine or give warmth than for a Christian to cease to give light: it is easier for that to happen than for light to become darkness. Do not say that that is impossible: what is impossible is the contrary . . . If we behave in the correct way, everything else will follow as a natural consequence. The light of Christians cannot be hidden, a lamp shining so brightly cannot be hidden.” — St. John Chrysostom