Solemnity of Easter Sunday: The Resurrection of the Lord 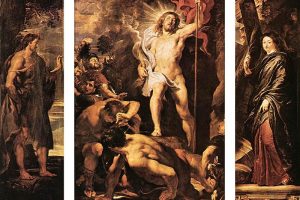 
34 And Peter opened his mouth and said: “Truly I perceive that God shows no partiality, 37 the word which was proclaimed throughout all Judea, beginning from Galilee after the baptism which John preached: 38 how God anointed Jesus of Nazareth with the Holy Spirit and with power; how he went about doing good and healing all that were oppressed by the devil, for God was with him. 39 And we are witnesses to all that he did both in the country of the Jews and in Jerusalem. They put him to death by hanging him on a tree; 40 but God raised him on the third day and made him manifest; 41 not to all the people but to us who were chosen by God as witnesses, who ate and drank with him after he rose from the dead. 42 And he commanded us to preach to the people, and to testify that he is the one ordained by God to be judge of the living and the dead. 43 To him all the prophets bear witness that every one who believes in him receives forgiveness of sins through his name.”


1 Now on the first day of the week Mary Mag’dalene came to the tomb early, while it was still dark, and saw that the stone had been taken away from the tomb. 2 So she ran, and went to Simon Peter and the other disciple, the one whom Jesus loved, and said to them, “They have taken the Lord out of the tomb, and we do not know where they have laid him.” 3 Peter then came out with the other disciple, and they went toward the tomb. 4 They both ran, but the other disciple outran Peter and reached the tomb first; 5 and stooping to look in, he saw the linen cloths lying there, but he did not go in. 6 Then Simon Peter came, following him, and went into the tomb; he saw the linen cloths lying, 7 and the napkin, which had been on his head, not lying with the linen cloths but rolled up in a place by itself. 8 Then the other disciple, who reached the tomb first, also went in, and he saw and believed; 9 for as yet they did not know the scripture, that he must rise from the dead.