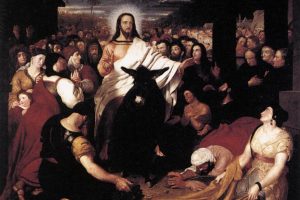 
4 The Lord GOD has given me the tongue of those who are taught, that I may know how to sustain with a word him that is weary. Morning by morning he wakens, he wakens my ear to hear as those who are taught. 5 The Lord GOD has opened my ear, and I was not rebellious, I turned not backward. 6 I gave my back to the smiters, and my cheeks to those who pulled out the beard; I hid not my face from shame and spitting. 7 For the Lord GOD helps me; therefore I have not been confounded; therefore I have set my face like a flint, and I know that I shall not be put to shame.


7 All who see me mock at me, they make mouths at me, they wag their heads; 8 “He committed his cause to the LORD; let him deliver him, let him rescue him, for he delights in him!” 16 Yea, dogs are round about me; a company of evildoers encircle me; they have pierced my hands and feet — 17 I can count all my bones — they stare and gloat over me; 18 they divide my garments among them, and for my raiment they cast lots. 19 But thou, O LORD, be not far off! O thou my help, hasten to my aid! 22 I will tell of thy name to my brethren; in the midst of the congregation I will praise thee: 23 You who fear the LORD, praise him! all you sons of Jacob, glorify him, and stand in awe of him, all you sons of Israel!


6 Who, though he was in the form of God, did not count equality with God a thing to be grasped, 7 but emptied himself, taking the form of a servant, being born in the likeness of men. 8 And being found in human form he humbled himself and became obedient unto death, even death on a cross. 9 Therefore God has highly exalted him and bestowed on him the name which is above every name, 10 that at the name of Jesus every knee should bow, in heaven and on earth and under the earth, 11 and every tongue confess that Jesus Christ is Lord, to the glory of God the Father.