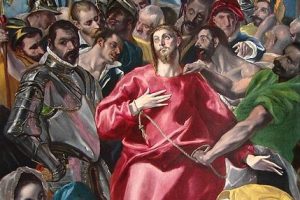 
1 For they reasoned unsoundly, saying to themselves, “Short and sorrowful is our life, and there is no remedy when a man comes to his end, and no one has been known to return from Hades. 12 Let us lie in wait for the righteous man, because he is inconvenient to us and opposes our actions; he reproaches us for sins against the law, and accuses us of sins against our training. 13 He professes to have knowledge of God, and calls himself a child of the Lord. 14 He became to us a reproof of our thoughts; 15 the very sight of him is a burden to us, because his manner of life is unlike that of others, and his ways are strange. 16 We are considered by him as something base, and he avoids our ways as unclean; he calls the last end of the righteous happy, and boasts that God is his father. 17 Let us see if his words are true, and let us test what will happen at the end of his life; 18 for if the righteous man is God’s son, he will help him, and will deliver him from the hand of his adversaries. 19 Let us test him with insult and torture, that we may find out how gentle he is, and make trial of his forbearance. 20 Let us condemn him to a shameful death, for, according to what he says, he will be protected.” 21 Thus they reasoned, but they were led astray, for their wickedness blinded them, 22 and they did not know the secret purposes of God, nor hope for the wages of holiness, nor discern the prize for blameless souls.


16 The face of the LORD is against evildoers, to cut off the remembrance of them from the earth. 17 When the righteous cry for help, the LORD hears, and delivers them out of all their troubles. 18 The LORD is near to the brokenhearted, and saves the crushed in spirit. 19 Many are the afflictions of the righteous; but the LORD delivers him out of them all. 20 He keeps all his bones; not one of them is broken. 22 The LORD redeems the life of his servants; none of those who take refuge in him will be condemned.


1 After this Jesus went about in Galilee; he would not go about in Judea, because the Jews sought to kill him. 2 Now the Jews’ feast of Tabernacles was at hand. 10 But after his brothers had gone up to the feast, then he also went up, not publicly but in private. 25 Some of the people of Jerusalem therefore said, “Is not this the man whom they seek to kill? 26 And here he is, speaking openly, and they say nothing to him! Can it be that the authorities really know that this is the Christ? 27 Yet we know where this man comes from; and when the Christ appears, no one will know where he comes from.” 28 So Jesus proclaimed, as he taught in the temple, “You know me, and you know where I come from? But I have not come of my own accord; he who sent me is true, and him you do not know. 29 I know him, for I come from him, and he sent me.” 30 So they sought to arrest him; but no one laid hands on him, because his hour had not yet come.

Reflection for the day: “My innocent Jesus, by the torment You suffered in being stripped of Your garments, help me to strip myself of all attachment for the things of earth that I may place all my love in You who are so worthy of my love.” — St. Alphonsus Liguori, Stations of the Cross (10th Station: Jesus is Stripped of His Garments)