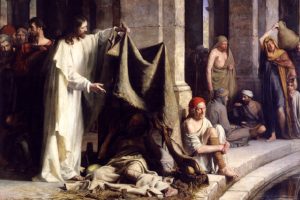 
1 Then he brought me back to the door of the temple; and behold, water was issuing from below the threshold of the temple toward the east (for the temple faced east); and the water was flowing down from below the south end of the threshold of the temple, south of the altar. 2 Then he brought me out by way of the north gate, and led me round on the outside to the outer gate, that faces toward the east; and the water was coming out on the south side. 3 Going on eastward with a line in his hand, the man measured a thousand cubits, and then led me through the water; and it was ankle-deep. 4 Again he measured a thousand, and led me through the water; and it was knee-deep. Again he measured a thousand, and led me through the water; and it was up to the loins. 5 Again he measured a thousand, and it was a river that I could not pass through, for the water had risen; it was deep enough to swim in, a river that could not be passed through. 6 And he said to me, “Son of man, have you seen this?” Then he led me back along the bank of the river. 7 As I went back, I saw upon the bank of the river very many trees on the one side and on the other. 8 And he said to me, “This water flows toward the eastern region and goes down into the Arabah; and when it enters the stagnant waters of the sea, the water will become fresh. 9 And wherever the river goes every living creature which swarms will live, and there will be very many fish; for this water goes there, that the waters of the sea may become fresh; so everything will live where the river goes. 12 And on the banks, on both sides of the river, there will grow all kinds of trees for food. Their leaves will not wither nor their fruit fail, but they will bear fresh fruit every month, because the water for them flows from the sanctuary. Their fruit will be for food, and their leaves for healing.”


1 God is our refuge and strength, a very present help in trouble. 2 Therefore we will not fear though the earth should change, though the mountains shake in the heart of the sea; 4 There is a river whose streams make glad the city of God, the holy habitation of the Most High. 5 God is in the midst of her, she shall not be moved; God will help her right early. 7 The LORD of hosts is with us; the God of Jacob is our refuge. [Selah] 8 Come, behold the works of the LORD, how he has wrought desolations in the earth.


1 After this there was a feast of the Jews, and Jesus went up to Jerusalem. 2 Now there is in Jerusalem by the Sheep Gate a pool, in Hebrew called Beth-za’tha, which has five porticoes. 3 In these lay a multitude of invalids, blind, lame, paralyzed. 5 One man was there, who had been ill for thirty-eight years. 6 When Jesus saw him and knew that he had been lying there a long time, he said to him, “Do you want to be healed?” 7 The sick man answered him, “Sir, I have no man to put me into the pool when the water is troubled, and while I am going another steps down before me.” 8 Jesus said to him, “Rise, take up your pallet, and walk.” 9 And at once the man was healed, and he took up his pallet and walked. Now that day was the sabbath. 10 So the Jews said to the man who was cured, “It is the sabbath, it is not lawful for you to carry your pallet.” 11 But he answered them, “The man who healed me said to me, `Take up your pallet, and walk.'” 12 They asked him, “Who is the man who said to you, `Take up your pallet, and walk’?” 13 Now the man who had been healed did not know who it was, for Jesus had withdrawn, as there was a crowd in the place. 14 Afterward, Jesus found him in the temple, and said to him, “See, you are well! Sin no more, that nothing worse befall you.” 15 The man went away and told the Jews that it was Jesus who had healed him. 16 And this was why the Jews persecuted Jesus, because he did this on the sabbath.