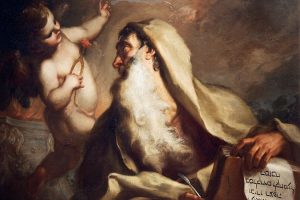 
1 I give thee thanks, O LORD, with my whole heart; before the gods I sing thy praise; 2 I bow down toward thy holy temple and give thanks to thy name for thy steadfast love and thy faithfulness; for thou hast exalted above everything thy name and thy word. 3 On the day I called, thou didst answer me, my strength of soul thou didst increase. 4 All the kings of the earth shall praise thee, O LORD, for they have heard the words of thy mouth; 5 and they shall sing of the ways of the LORD, for great is the glory of the LORD. 7 Though I walk in the midst of trouble, thou dost preserve my life; thou dost stretch out thy hand against the wrath of my enemies, and thy right hand delivers me. 8 The LORD will fulfil his purpose for me; thy steadfast love, O LORD, endures for ever. Do not forsake the work of thy hands.


1 Now I would remind you, brethren, in what terms I preached to you the gospel, which you received, in which you stand, 2 by which you are saved, if you hold it fast — unless you believed in vain. 3 For I delivered to you as of first importance what I also received, that Christ died for our sins in accordance with the scriptures, 4 that he was buried, that he was raised on the third day in accordance with the scriptures, 5 and that he appeared to Cephas, then to the twelve. 6 Then he appeared to more than five hundred brethren at one time, most of whom are still alive, though some have fallen asleep. 7 Then he appeared to James, then to all the apostles. 8 Last of all, as to one untimely born, he appeared also to me. 9 For I am the least of the apostles, unfit to be called an apostle, because I persecuted the church of God. 10 But by the grace of God I am what I am, and his grace toward me was not in vain. On the contrary, I worked harder than any of them, though it was not I, but the grace of God which is with me. 11 Whether then it was I or they, so we preach and so you believed.

Reflection for the day: “Don’t sow your desires in someone else’s garden, just cultivate your own, as best you can; don’t long to be other than what you are but desire to be thoroughly what you are. Direct your thoughts, to being very good at that and to bearing the crosses, little or great, that you will find there. Believe me, this is the most important and least understood point to the spiritual life. We all love according to what is our taste, few people like what is according to their duty or to God’s liking. What is the use of building castles in Spain when we have to live in France?” — St. Franics de Sales