Wednesday of the 2nd Week in Ordinary Time 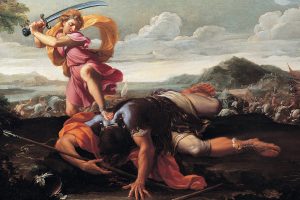 
32 And David said to Saul, “Let no man’s heart fail because of him; your servant will go and fight with this Philistine.” 33 And Saul said to David, “You are not able to go against this Philistine to fight with him; for you are but a youth, and he has been a man of war from his youth.” 37 And David said, “The LORD who delivered me from the paw of the lion and from the paw of the bear, will deliver me from the hand of this Philistine.” And Saul said to David, “Go, and the LORD be with you!” 40 Then he took his staff in his hand, and chose five smooth stones from the brook, and put them in his shepherd’s bag or wallet; his sling was in his hand, and he drew near to the Philistine. 41 And the Philistine came on and drew near to David, with his shield-bearer in front of him. 42 And when the Philistine looked, and saw David, he disdained him; for he was but a youth, ruddy and comely in appearance. 43 And the Philistine said to David, “Am I a dog, that you come to me with sticks?” And the Philistine cursed David by his gods. 44 The Philistine said to David, “Come to me, and I will give your flesh to the birds of the air and to the beasts of the field.” 45 Then David said to the Philistine, “You come to me with a sword and with a spear and with a javelin; but I come to you in the name of the LORD of hosts, the God of the armies of Israel, whom you have defied. 46 This day the LORD will deliver you into my hand, and I will strike you down, and cut off your head; and I will give the dead bodies of the host of the Philistines this day to the birds of the air and to the wild beasts of the earth; that all the earth may know that there is a God in Israel, 47 and that all this assembly may know that the LORD saves not with sword and spear; for the battle is the LORD’S and he will give you into our hand.” 48 When the Philistine arose and came and drew near to meet David, David ran quickly toward the battle line to meet the Philistine. 49 And David put his hand in his bag and took out a stone, and slung it, and struck the Philistine on his forehead; the stone sank into his forehead, and he fell on his face to the ground. 50 So David prevailed over the Philistine with a sling and with a stone, and struck the Philistine, and killed him; there was no sword in the hand of David. 51 Then David ran and stood over the Philistine, and took his sword and drew it out of its sheath, and killed him, and cut off his head with it. When the Philistines saw that their champion was dead, they fled.


1 Blessed be the LORD, my rock, who trains my hands for war, and my fingers for battle; 2 my rock and my fortress, my stronghold and my deliverer, my shield and he in whom I take refuge, who subdues the peoples under him. 9 I will sing a new song to thee, O God; upon a ten-stringed harp I will play to thee, 10 who givest victory to kings, who rescuest David thy servant.


1 Again he entered the synagogue, and a man was there who had a withered hand. 2 And they watched him, to see whether he would heal him on the sabbath, so that they might accuse him. 3 And he said to the man who had the withered hand, “Come here.” 4 And he said to them, “Is it lawful on the sabbath to do good or to do harm, to save life or to kill?” But they were silent. 5 And he looked around at them with anger, grieved at their hardness of heart, and said to the man, “Stretch out your hand.” He stretched it out, and his hand was restored. 6 The Pharisees went out, and immediately held counsel with the Hero’di-ans against him, how to destroy him.

Reflection for the day: “The greater and more persistent your confidence in God, the more abundantly you will receive all that you ask.” — St. Albert the Great