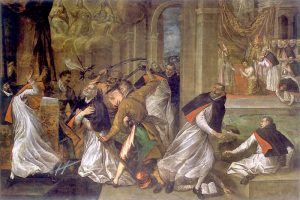 3 And by this we may be sure that we know him, if we keep his commandments. 4 He who says “I know him” but disobeys his commandments is a liar, and the truth is not in him; 5 but whoever keeps his word, in him truly love for God is perfected. By this we may be sure that we are in him: 6 he who says he abides in him ought to walk in the same way in which he walked. 7 Beloved, I am writing you no new commandment, but an old commandment which you had from the beginning; the old commandment is the word which you have heard. 8 Yet I am writing you a new commandment, which is true in him and in you, because the darkness is passing away and the true light is already shining. 9 He who says he is in the light and hates his brother is in the darkness still. 10 He who loves his brother abides in the light, and in it there is no cause for stumbling. 11 But he who hates his brother is in the darkness and walks in the darkness, and does not know where he is going, because the darkness has blinded his eyes.

1 O sing to the LORD a new song; sing to the LORD, all the earth! 2 Sing to the LORD, bless his name; tell of his salvation from day to day. 3 Declare his glory among the nations, his marvelous works among all the peoples! 5 For all the gods of the peoples are idols; but the LORD made the heavens. 6 Honor and majesty are before him; strength and beauty are in his sanctuary.

22 And when the time came for their purification according to the law of Moses, they brought him up to Jerusalem to present him to the Lord 23 (as it is written in the law of the Lord, “Every male that opens the womb shall be called holy to the Lord”) 24 and to offer a sacrifice according to what is said in the law of the Lord, “a pair of turtledoves, or two young pigeons.” 25 Now there was a man in Jerusalem, whose name was Simeon, and this man was righteous and devout, looking for the consolation of Israel, and the Holy Spirit was upon him. 26 And it had been revealed to him by the Holy Spirit that he should not see death before he had seen the Lord’s Christ. 27 And inspired by the Spirit he came into the temple; and when the parents brought in the child Jesus, to do for him according to the custom of the law, 28 he took him up in his arms and blessed God and said, 29 “Lord, now lettest thou thy servant depart in peace, according to thy word; 30 for mine eyes have seen thy salvation 31 which thou hast prepared in the presence of all peoples, 32 a light for revelation to the Gentiles, and for glory to thy people Israel.” 33 And his father and his mother marveled at what was said about him; 34 and Simeon blessed them and said to Mary his mother, “Behold, this child is set for the fall and rising of many in Israel, and for a sign that is spoken against 35 (and a sword will pierce through your own soul also), that thoughts out of many hearts may be revealed.”

Reflection for the day: “Remember then how our fathers worked out their salvation; remember the sufferings through which the Church has grown, and the storms the ship of Peter has weathered because it has Christ on board. Remember how the crown was attained by those whose sufferings gave new radiance to their faith. The whole company of saints bears witness to the unfailing truth that without real effort no one wins the crown.” — St. Thomas Becket