Friday of the 3rd Week of Advent 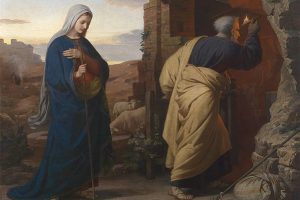 
2 Assemble and hear, O sons of Jacob, and hearken to Israel your father. 8 Judah, your brothers shall praise you; your hand shall be on the neck of your enemies; your father’s sons shall bow down before you. 9 Judah is a lion’s whelp; from the prey, my son, you have gone up. He stooped down, he couched as a lion, and as a lioness; who dares rouse him up? 10 The scepter shall not depart from Judah, nor the ruler’s staff from between his feet, until he comes to whom it belongs; and to him shall be the obedience of the peoples.


1 Give the king thy justice, O God, and thy righteousness to the royal son! 2 May he judge thy people with righteousness, and thy poor with justice! 3 Let the mountains bear prosperity for the people, and the hills, in righteousness! 6 May he be like rain that falls on the mown grass, like showers that water the earth! 7 In his days may righteousness flourish, and peace abound, till the moon be no more! 16 May there be abundance of grain in the land; on the tops of the mountains may it wave; may its fruit be like Lebanon; and may men blossom forth from the cities like the grass of the field!

Reflection for the day: “But when finally the scrolls of history are complete, down to the last word of time, the saddest line of all will be: ‘There was no room in the inn.’…The inn was the gathering place of public opinion, the focal point of the world’s moods, the rendezvous of the worldly, the rallying place of the popular and the successful. But there’s no room in the place where the world gathers. The stable is a place for outcasts, the ignored and the forgotten. The world might have expected the Son of God to be born in an inn; a stable would certainly be the last place in the world where one would look for him. The lesson is: divinity is always where you least expect to find it. So the Son of God made man is invited to enter into his own world through a back door.” — Venerable Fulton Sheen