Tuesday of the 16th Week in Ordinary Time 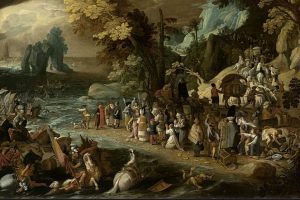 
8 “At the blast of thy nostrils the waters piled up, the floods stood up in a heap; the deeps congealed in the heart of the sea. 9 The enemy said, `I will pursue, I will overtake, I will divide the spoil, my desire shall have its fill of them. I will draw my sword, my hand shall destroy them.’ 10 Thou didst blow with thy wind, the sea covered them; they sank as lead in the mighty waters. 12 Thou didst stretch out thy right hand, the earth swallowed them. 17 Thou wilt bring them in, and plant them on thy own mountain, the place, O LORD, which thou hast made for thy abode, the sanctuary, LORD, which thy hands have established.”


46 While he was still speaking to the people, behold, his mother and his brothers stood outside, asking to speak to him. 48 But he replied to the man who told him, “Who is my mother, and who are my brothers?” 49 And stretching out his hand toward his disciples, he said, “Here are my mother and my brothers! 50 For whoever does the will of my Father in heaven is my brother, and sister, and mother.”

Reflection for the day: “The best way to acquire that peace which is born of the love of God, the inexhaustible Source of all virtues, is to accept all tribulations, whether spiritual or temporal, as coming directly from the paternal hand of God; to look upon all unpleasant events as very costly gifts presented to us by our heavenly Father; to repeat often the sacred word of Our Saviour: ‘Yea Father, for so hath it seemed good in Thy sight.’ (Matt. xi. 26.)” — St. Paul of the Cross