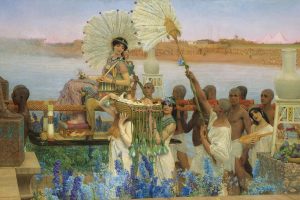 
1 Now a man from the house of Levi went and took to wife a daughter of Levi. 2 The woman conceived and bore a son; and when she saw that he was a goodly child, she hid him three months. 3 And when she could hide him no longer she took for him a basket made of bulrushes, and daubed it with bitumen and pitch; and she put the child in it and placed it among the reeds at the river’s brink. 4 And his sister stood at a distance, to know what would be done to him. 5 Now the daughter of Pharaoh came down to bathe at the river, and her maidens walked beside the river; she saw the basket among the reeds and sent her maid to fetch it. 6 When she opened it she saw the child; and lo, the babe was crying. She took pity on him and said, “This is one of the Hebrews’ children.” 7 Then his sister said to Pharaoh’s daughter, “Shall I go and call you a nurse from the Hebrew women to nurse the child for you?” 8 And Pharaoh’s daughter said to her, “Go.” So the girl went and called the child’s mother. 9 And Pharaoh’s daughter said to her, “Take this child away, and nurse him for me, and I will give you your wages.” So the woman took the child and nursed him. 10 And the child grew, and she brought him to Pharaoh’s daughter, and he became her son; and she named him Moses, for she said, “Because I drew him out of the water.” 11 One day, when Moses had grown up, he went out to his people and looked on their burdens; and he saw an Egyptian beating a Hebrew, one of his people. 12 He looked this way and that, and seeing no one he killed the Egyptian and hid him in the sand. 13 When he went out the next day, behold, two Hebrews were struggling together; and he said to the man that did the wrong, “Why do you strike your fellow?” 14 He answered, “Who made you a prince and a judge over us? Do you mean to kill me as you killed the Egyptian?” Then Moses was afraid, and thought, “Surely the thing is known.” 15 When Pharaoh heard of it, he sought to kill Moses. But Moses fled from Pharaoh, and stayed in the land of Mid’ian; and he sat down by a well.


2 I sink in deep mire, where there is no foothold; I have come into deep waters, and the flood sweeps over me. 13 But as for me, my prayer is to thee, O LORD. At an acceptable time, O God, in the abundance of thy steadfast love answer me. With thy faithful help 29 But I am afflicted and in pain; let thy salvation, O God, set me on high! 30 I will praise the name of God with a song; I will magnify him with thanksgiving. 32 Let the oppressed see it and be glad; you who seek God, let your hearts revive. 33 For the LORD hears the needy, and does not despise his own that are in bonds.

Reflection for the day: “Wherever the bishop shall appear, there let the multitude also be; even as, wherever Jesus Christ is, there is the Catholic Church.” — St. Ignatius of Antioch