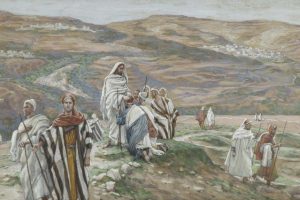 
12 And Amazi’ah said to Amos, “O seer, go, flee away to the land of Judah, and eat bread there, and prophesy there; 13 but never again prophesy at Bethel, for it is the king’s sanctuary, and it is a temple of the kingdom.” 14 Then Amos answered Amazi’ah, “I am no prophet, nor a prophet’s son; but I am a herdsman, and a dresser of sycamore trees, 15 and the LORD took me from following the flock, and the LORD said to me, `Go, prophesy to my people Israel.'”


8 Let me hear what God the LORD will speak, for he will speak peace to his people, to his saints, to those who turn to him in their hearts. 9 Surely his salvation is at hand for those who fear him, that glory may dwell in our land. 10Steadfast love and faithfulness will meet; righteousness and peace will kiss each other. 11 Faithfulness will spring up from the ground, and righteousness will look down from the sky. 12 Yea, the LORD will give what is good, and our land will yield its increase. 13 Righteousness will go before him, and make his footsteps a way.


3 Blessed be the God and Father of our Lord Jesus Christ, who has blessed us in Christ with every spiritual blessing in the heavenly places, 4 even as he chose us in him before the foundation of the world, that we should be holy and blameless before him. 5 He destined us in love to be his sons through Jesus Christ, according to the purpose of his will, 6 to the praise of his glorious grace which he freely bestowed on us in the Beloved. 7 In him we have redemption through his blood, the forgiveness of our trespasses, according to the riches of his grace 8 which he lavished upon us. 9 For he has made known to us in all wisdom and insight the mystery of his will, according to his purpose which he set forth in Christ 10 as a plan for the fulness of time, to unite all things in him, things in heaven and things on earth. 11 In him, according to the purpose of him who accomplishes all things according to the counsel of his will, 12 we who first hoped in Christ have been destined and appointed to live for the praise of his glory. 13 In him you also, who have heard the word of truth, the gospel of your salvation, and have believed in him, were sealed with the promised Holy Spirit, 14 which is the guarantee of our inheritance until we acquire possession of it, to the praise of his glory.


7 And he called to him the twelve, and began to send them out two by two, and gave them authority over the unclean spirits. 8 He charged them to take nothing for their journey except a staff; no bread, no bag, no money in their belts; 9 but to wear sandals and not put on two tunics. 10 And he said to them, “Where you enter a house, stay there until you leave the place. 11 And if any place will not receive you and they refuse to hear you, when you leave, shake off the dust that is on your feet for a testimony against them.” 12 So they went out and preached that men should repent. 13 And they cast out many demons, and anointed with oil many that were sick and healed them.

Reflection for the day: “By habitually thinking of the presence of God, we succeed in praying twenty-four hours a day.” — St. Paul of the Cross