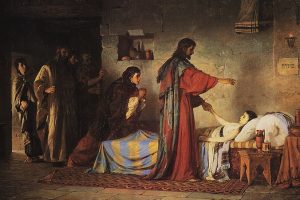 
1:13 Because God did not make death, and he does not delight in the death of the living. 14 For he created all things that they might exist, and the generative forces of the world are wholesome, and there is no destructive poison in them; and the dominion of Hades is not on earth. 15 For righteousness is immortal. 2:23 for God created man for incorruption, and made him in the image of his own eternity, 24 but through the devil’s envy death entered the world, and those who belong to his party experience it.


7 Now as you excel in everything — in faith, in utterance, in knowledge, in all earnestness, and in your love for us — see that you excel in this gracious work also. 9 For you know the grace of our Lord Jesus Christ, that though he was rich, yet for your sake he became poor, so that by his poverty you might become rich. 13 I do not mean that others should be eased and you burdened, 14 but that as a matter of equality your abundance at the present time should supply their want, so that their abundance may supply your want, that there may be equality. 15 As it is written, “He who gathered much had nothing over, and he who gathered little had no lack.”

Reflection for the day: “‘I came to cast fire upon the earth; and would that it were already kindled.’ (Luke 12:29) We have approached the fire of the love of God. Let us allow that fire to burn our lives. Let us feed the desire to spread that divine fire throughout the world, making it known to all the people around us. They too can experience the peace of Christ and find happiness there. A Christian who lives united to Christ’s heart can have no goals but these: peace in society, peace in the Church, peace in his soul, the peace of God which will reach its climax when his kingdom comes.” — St. Josemaria Escriva