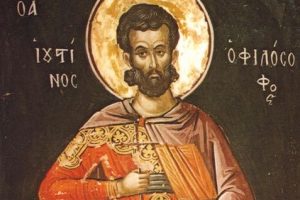 
9 On the same night I returned from burying him, and because I was defiled I slept by the wall of the courtyard, and my face was uncovered. 10 I did not know that there were sparrows on the wall and their fresh droppings fell into my open eyes and white films formed on my eyes. I went to physicians, but they did not help me. Ahikar, however, took care of me until he went to Elymais. 11 Then my wife Anna earned money at women’s work. 12 She used to send the product to the owners. Once when they paid her wages, they also gave her a kid; 13 and when she returned to me it began to bleat. So I said to her, “Where did you get the kid? It is not stolen, is it? Return it to the owners; for it is not right to eat what is stolen.” 14 And she said, “It was given to me as a gift in addition to my wages.” But I did not believe her, and told her to return it to the owners; and I blushed for her. Then she replied to me, “Where are your charities and your righteous deeds? You seem to know everything!”


1 Praise the LORD. Blessed is the man who fears the LORD, who greatly delights in his commandments! 2His descendants will be mighty in the land; the generation of the upright will be blessed. 7 He is not afraid of evil tidings; his heart is firm, trusting in the LORD. 8 His heart is steady, he will not be afraid, until he sees his desire on his adversaries. 9 He has distributed freely, he has given to the poor; his righteousness endures for ever; his horn is exalted in honor.


13 And they sent to him some of the Pharisees and some of the Hero’di-ans, to entrap him in his talk. 14 And they came and said to him, “Teacher, we know that you are true, and care for no man; for you do not regard the position of men, but truly teach the way of God. Is it lawful to pay taxes to Caesar, or not? 15 Should we pay them, or should we not?” But knowing their hypocrisy, he said to them, “Why put me to the test? Bring me a coin, and let me look at it.” 16 And they brought one. And he said to them, “Whose likeness and inscription is this?” They said to him, “Caesar’s.” 17 Jesus said to them, “Render to Caesar the things that are Caesar’s, and to God the things that are God’s.” And they were amazed at him.

Reflection for the day: “The world suffers nothing from Christians but hates them, because they reject its pleasures.” — St. Justin Martyr