Friday of the 8th Week in Ordinary Time 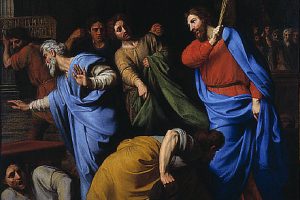 
1 Let us now praise famous men, and our fathers in their generations. 9 And there are some who have no memorial, who have perished as though they had not lived; they have become as though they had not been born, and so have their children after them. 10 But these were men of mercy, whose righteous deeds have not been forgotten; 11 their prosperity will remain with their descendants, and their inheritance to their children’s children. 12 Their descendants stand by the covenants; their children also, for their sake. 13 Their posterity will continue for ever, and their glory will not be blotted out.


11 And he entered Jerusalem, and went into the temple; and when he had looked round at everything, as it was already late, he went out to Bethany with the twelve. 12 On the following day, when they came from Bethany, he was hungry. 13 And seeing in the distance a fig tree in leaf, he went to see if he could find anything on it. When he came to it, he found nothing but leaves, for it was not the season for figs. 14 And he said to it, “May no one ever eat fruit from you again.” And his disciples heard it. 15 And they came to Jerusalem. And he entered the temple and began to drive out those who sold and those who bought in the temple, and he overturned the tables of the money-changers and the seats of those who sold pigeons; 16 and he would not allow any one to carry anything through the temple. 17 And he taught, and said to them, “Is it not written, `My house shall be called a house of prayer for all the nations’? But you have made it a den of robbers.” 18 And the chief priests and the scribes heard it and sought a way to destroy him; for they feared him, because all the multitude was astonished at his teaching. 19 And when evening came they went out of the city. 20 As they passed by in the morning, they saw the fig tree withered away to its roots. 21 And Peter remembered and said to him, “Master, look! The fig tree which you cursed has withered.” 22 And Jesus answered them, “Have faith in God. 23 Truly, I say to you, whoever says to this mountain, `Be taken up and cast into the sea,’ and does not doubt in his heart, but believes that what he says will come to pass, it will be done for him. 24 Therefore I tell you, whatever you ask in prayer, believe that you have received it, and it will be yours. 25 And whenever you stand praying, forgive, if you have anything against any one; so that your Father also who is in heaven may forgive you your trespasses.”

Reflection for the day: “Oh, how senseless we are! the good God calls us to Him, and we fly from Him! He wishes to make us happy, and we will not have His happiness. He commands us to love Him, and we give our hearts to the devil. We employ in ruining ourselves the time He gives us to save our souls. We make war upon Him with the means He gave us to serve Him.” — St. John Vianney