Monday of the 7th Week of Easter 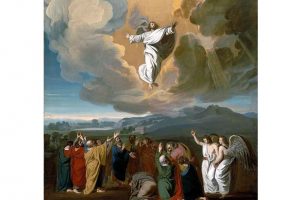 
1 While Apol’los was at Corinth, Paul passed through the upper country and came to Ephesus. There he found some disciples. 2 And he said to them, “Did you receive the Holy Spirit when you believed?” And they said, “No, we have never even heard that there is a Holy Spirit.” 3 And he said, “Into what then were you baptized?” They said, “Into John’s baptism.” 4 And Paul said, “John baptized with the baptism of repentance, telling the people to believe in the one who was to come after him, that is, Jesus.” 5 On hearing this, they were baptized in the name of the Lord Jesus. 6 And when Paul had laid his hands upon them, the Holy Spirit came on them; and they spoke with tongues and prophesied. 7 There were about twelve of them in all. 8And he entered the synagogue and for three months spoke boldly, arguing and pleading about the kingdom of God.

Reflection for the day: “The growth of Jesus ‘in wisdom and in stature, and in favor with God and man’ (Lk. 2:52) took place within the Holy Family under the eyes of St. Joseph, who had the important task of ‘raising’ Jesus, that is, feeding, clothing, and educating him in the Law and in a trade, in keeping with the duties of a father.” — Pope St. John Paul II