Friday of the 5th Week in Ordinary Time 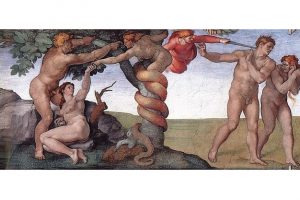 1 Now the serpent was more subtle than any other wild creature that the LORD God had made. He said to the woman, “Did God say, `You shall not eat of any tree of the garden’?” 2 And the woman said to the serpent, “We may eat of the fruit of the trees of the garden; 3 but God said, `You shall not eat of the fruit of the tree which is in the midst of the garden, neither shall you touch it, lest you die.'” 4 But the serpent said to the woman, “You will not die. 5 For God knows that when you eat of it your eyes will be opened, and you will be like God, knowing good and evil.” 6 So when the woman saw that the tree was good for food, and that it was a delight to the eyes, and that the tree was to be desired to make one wise, she took of its fruit and ate; and she also gave some to her husband, and he ate. 7 Then the eyes of both were opened, and they knew that they were naked; and they sewed fig leaves together and made themselves aprons. 8 And they heard the sound of the LORD God walking in the garden in the cool of the day, and the man and his wife hid themselves from the presence of the LORD God among the trees of the garden.

1 Blessed is he whose transgression is forgiven, whose sin is covered. 2 Blessed is the man to whom the LORD imputes no iniquity, and in whose spirit there is no deceit. 5 I acknowledged my sin to thee, and I did not hide my iniquity; I said, “I will confess my transgressions to the LORD”; then thou didst forgive the guilt of my sin. [Selah] 6 Therefore let every one who is godly offer prayer to thee; at a time of distress, in the rush of great waters, they shall not reach him. 7 Thou art a hiding place for me, thou preservest me from trouble; thou dost encompass me with deliverance.

Reflection for the day: “When tempted, invoke your Angel. He is more eager to help you than you are to be helped! Ignore the devil and do not be afraid of him: he trembles and flees at the sight of your Guardian Angel.” — St. John Bosco