Saturday of the 3rd Week in Ordinary Time 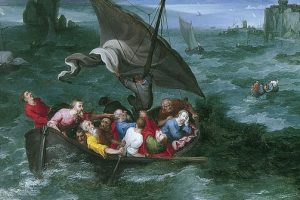 1 Now faith is the assurance of things hoped for, the conviction of things not seen. 2 For by it the men of old received divine approval. 8 By faith Abraham obeyed when he was called to go out to a place which he was to receive as an inheritance; and he went out, not knowing where he was to go. 9 By faith he sojourned in the land of promise, as in a foreign land, living in tents with Isaac and Jacob, heirs with him of the same promise. 10 For he looked forward to the city which has foundations, whose builder and maker is God. 11 By faith Sarah herself received power to conceive, even when she was past the age, since she considered him faithful who had promised. 12 Therefore from one man, and him as good as dead, were born descendants as many as the stars of heaven and as the innumerable grains of sand by the seashore. 13 These all died in faith, not having received what was promised, but having seen it and greeted it from afar, and having acknowledged that they were strangers and exiles on the earth. 14 For people who speak thus make it clear that they are seeking a homeland. 15 If they had been thinking of that land from which they had gone out, they would have had opportunity to return. 16 But as it is, they desire a better country, that is, a heavenly one. Therefore God is not ashamed to be called their God, for he has prepared for them a city. 17 By faith Abraham, when he was tested, offered up Isaac, and he who had received the promises was ready to offer up his only son, 18 of whom it was said, “Through Isaac shall your descendants be named.” 19 He considered that God was able to raise men even from the dead; hence, figuratively speaking, he did receive him back.

69 And he has raised up a horn of salvation for us in the house of his servant David, 70 as he spoke by the mouth of his holy prophets from of old, 71 that we should be saved from our enemies, and from the hand of all who hate us; 72 to perform the mercy promised to our fathers, and to remember his holy covenant, 73 the oath which he swore to our father Abraham, 74 to grant us that we, being delivered from the hand of our enemies, might serve him without fear, 75 in holiness and righteousness before him all the days of our life.

35 On that day, when evening had come, he said to them, “Let us go across to the other side.” 36 And leaving the crowd, they took him with them in the boat, just as he was. And other boats were with him. 37 And a great storm of wind arose, and the waves beat into the boat, so that the boat was already filling. 38 But he was in the stern, asleep on the cushion; and they woke him and said to him, “Teacher, do you not care if we perish?” 39 And he awoke and rebuked the wind, and said to the sea, “Peace! Be still!” And the wind ceased, and there was a great calm. 40 He said to them, “Why are you afraid? Have you no faith?” 41 And they were filled with awe, and said to one another, “Who then is this, that even wind and sea obey him?”

Reflection for the day: “Do not lose heart, even if you should discover that you lack qualities necessary for the work to which you are called. He who called you will not desert you, but the moment you are in need he will stretch out his saving hand.” — St. Angela Merici