Friday of the 27th Week of Ordinary Time 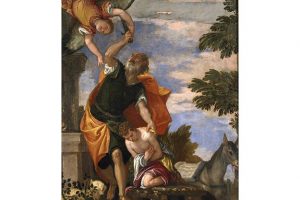 7 So you see that it is men of faith who are the sons of Abraham. 8 And the scripture, foreseeing that God would justify the Gentiles by faith, preached the gospel beforehand to Abraham, saying, “In you shall all the nations be blessed.” 9 So then, those who are men of faith are blessed with Abraham who had faith. 10 For all who rely on works of the law are under a curse; for it is written, “Cursed be every one who does not abide by all things written in the book of the law, and do them.” 11 Now it is evident that no man is justified before God by the law; for “He who through faith is righteous shall live”; 12 but the law does not rest on faith, for “He who does them shall live by them.” 13 Christ redeemed us from the curse of the law, having become a curse for us — for it is written, “Cursed be every one who hangs on a tree” — 14 that in Christ Jesus the blessing of Abraham might come upon the Gentiles, that we might receive the promise of the Spirit through faith.

1 Praise the LORD. I will give thanks to the LORD with my whole heart, in the company of the upright, in the congregation. 2 Great are the works of the LORD, studied by all who have pleasure in them. 3 Full of honor and majesty is his work, and his righteousness endures for ever. 4 He has caused his wonderful works to be remembered; the LORD is gracious and merciful. 5 He provides food for those who fear him; he is ever mindful of his covenant. 6 He has shown his people the power of his works, in giving them the heritage of the nations.

15 But some of them said, “He casts out demons by Be-el’zebul, the prince of demons”; 16 while others, to test him, sought from him a sign from heaven. 17 But he, knowing their thoughts, said to them, “Every kingdom divided against itself is laid waste, and a divided household falls. 18 And if Satan also is divided against himself, how will his kingdom stand? For you say that I cast out demons by Be-el’zebul. 19 And if I cast out demons by Be-el’zebul, by whom do your sons cast them out? Therefore they shall be your judges. 20 But if it is by the finger of God that I cast out demons, then the kingdom of God has come upon you. 21 When a strong man, fully armed, guards his own palace, his goods are in peace; 22 but when one stronger than he assails him and overcomes him, he takes away his armor in which he trusted, and divides his spoil. 23 He who is not with me is against me, and he who does not gather with me scatters. 24 “When the unclean spirit has gone out of a man, he passes through waterless places seeking rest; and finding none he says, `I will return to my house from which I came.’ 25 And when he comes he finds it swept and put in order. 26 Then he goes and brings seven other spirits more evil than himself, and they enter and dwell there; and the last state of that man becomes worse than the first.”

Reflection for the day: “The saints understood how great an outrage sin is against God. Some of them passed their lives in weeping for their sins. St. Peter wept all his life; he was still weeping at his death. St. Bernard used to say, “Lord! Lord! it is I who fastened You to the Cross!” — St. John Vianney