Thursday of the 11th Week of Ordinary Time 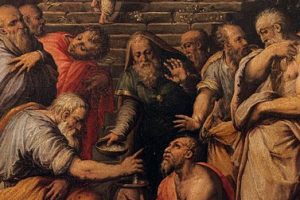 1 Then the prophet Elijah arose like a fire, and his word burned like a torch. 2 He brought a famine upon them, and by his zeal he made them few in number. 3 By the word of the Lord he shut up the heavens, and also three times brought down fire. 4 How glorious you were, O Elijah, in your wondrous deeds! And who has the right to boast which you have? 5 You who raised a corpse from death and from Hades, by the word of the Most High; 6 who brought kings down to destruction, and famous men from their beds; 7 who heard rebuke at Sinai and judgments of vengeance at Horeb; 8 who anointed kings to inflict retribution, and prophets to succeed you. 9 You who were taken up by a whirlwind of fire, in a chariot with horses of fire; 10 you who are ready at the appointed time, it is written, to calm the wrath of God before it breaks out in fury, to turn the heart of the father to the son, and to restore the tribes of Jacob. 11 Blessed are those who saw you, and those who have been adorned in love; for we also shall surely live. 12 It was Elijah who was covered by the whirlwind, and Elisha was filled with his spirit; in all his days he did not tremble before any ruler, and no one brought him into subjection. 13 Nothing was too hard for him, and when he was dead his body prophesied. 14 As in his life he did wonders, so in death his deeds were marvelous.

1 The LORD reigns; let the earth rejoice; let the many coastlands be glad! 2 Clouds and thick darkness are round about him; righteousness and justice are the foundation of his throne. 3 Fire goes before him, and burns up his adversaries round about. 4 His lightnings lighten the world; the earth sees and trembles. 5 The mountains melt like wax before the LORD, before the Lord of all the earth. 6 The heavens proclaim his righteousness; and all the peoples behold his glory. 7 All worshipers of images are put to shame, who make their boast in worthless idols; all gods bow down before him.

7 “And in praying do not heap up empty phrases as the Gentiles do; for they think that they will be heard for their many words. 8 Do not be like them, for your Father knows what you need before you ask him. 9 Pray then like this: Our Father who art in heaven, Hallowed be thy name. 10 Thy kingdom come. Thy will be done, On earth as it is in heaven. 11 Give us this day our daily bread; 12 And forgive us our debts, As we also have forgiven our debtors; 13 And lead us not into temptation, But deliver us from evil. 14 For if you forgive men their trespasses, your heavenly Father also will forgive you; 15 but if you do not forgive men their trespasses, neither will your Father forgive your trespasses.”

Reflection for the day: “What toil we must endure, what fatigue, while we are attempting to climb hills and the summits of mountains! What, that we may ascend to heaven! If you consider the promised reward, what you endure is less. Immortality is given to the one who perseveres; everlasting life is offered; the Lord promises His Kingdom.” — St. Cyprian of Carthage