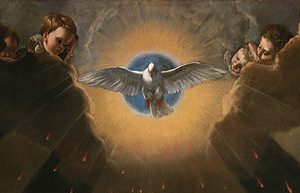 1 When the day of Pentecost had come, they were all together in one place. 2 And suddenly a sound came from heaven like the rush of a mighty wind, and it filled all the house where they were sitting. 3 And there appeared to them tongues as of fire, distributed and resting on each one of them. 4 And they were all filled with the Holy Spirit and began to speak in other tongues, as the Spirit gave them utterance. 5 Now there were dwelling in Jerusalem Jews, devout men from every nation under heaven. 6 And at this sound the multitude came together, and they were bewildered, because each one heard them speaking in his own language. 7 And they were amazed and wondered, saying, “Are not all these who are speaking Galileans? 8 And how is it that we hear, each of us in his own native language? 9 Par’thians and Medes and E’lamites and residents of Mesopota’mia, Judea and Cappado’cia, Pontus and Asia, 10 Phryg’ia and Pamphyl’ia, Egypt and the parts of Libya belonging to Cyre’ne, and visitors from Rome, both Jews and proselytes, 11 Cretans and Arabians, we hear them telling in our own tongues the mighty works of God.”

1 Bless the LORD, O my soul! O LORD my God, thou art very great! Thou art clothed with honor and majesty, 24 O LORD, how manifold are thy works! In wisdom hast thou made them all; the earth is full of thy creatures. 29 When thou hidest thy face, they are dismayed; when thou takest away their breath, they die and return to their dust. 30 When thou sendest forth thy Spirit, they are created; and thou renewest the face of the ground. 31 May the glory of the LORD endure for ever, may the LORD rejoice in his works, 34 May my meditation be pleasing to him, for I rejoice in the LORD.

3 Therefore I want you to understand that no one speaking by the Spirit of God ever says “Jesus be cursed!” and no one can say “Jesus is Lord” except by the Holy Spirit. 4 Now there are varieties of gifts, but the same Spirit; 5 and there are varieties of service, but the same Lord; 6 and there are varieties of working, but it is the same God who inspires them all in every one. 7 To each is given the manifestation of the Spirit for the common good. 12 For just as the body is one and has many members, and all the members of the body, though many, are one body, so it is with Christ. 13 For by one Spirit we were all baptized into one body — Jews or Greeks, slaves or free — and all were made to drink of one Spirit.

19 On the evening of that day, the first day of the week, the doors being shut where the disciples were, for fear of the Jews, Jesus came and stood among them and said to them, “Peace be with you.” 20 When he had said this, he showed them his hands and his side. Then the disciples were glad when they saw the Lord. 21 Jesus said to them again, “Peace be with you. As the Father has sent me, even so I send you.” 22 And when he had said this, he breathed on them, and said to them, “Receive the Holy Spirit. 23 If you forgive the sins of any, they are forgiven; if you retain the sins of any, they are retained.”

Reflection for the day: “‘And there appeared unto them cloven tongues like as of fire, and it sat upon each of them; and they were all filled with the Holy Spirit’ (Acts 2:3-4). They partook of fire, not of burning but of saving fire; of fire which consumes the thorns of sins, but gives luster to the soul. This is now coming upon you also, and that to strip away and consume your sins which are like thorns, and to brighten yet more that precious possession of your souls, and to give you grace; for He gave it then to the Apostles. And He sat upon them in the form of fiery tongues, that they might crown themselves with new and spiritual diadems by fiery tongues upon their heads. A fiery sword barred of old the gates of Paradise; a fiery tongue which brought salvation restored the gift.” — St. Cyril of Jerusalem