Monday of the 3rd Week of Lent 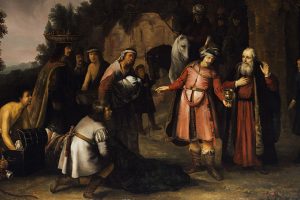 
1 Na’aman, commander of the army of the king of Syria, was a great man with his master and in high favor, because by him the LORD had given victory to Syria. He was a mighty man of valor, but he was a leper. 2 Now the Syrians on one of their raids had carried off a little maid from the land of Israel, and she waited on Na’aman’s wife. 3 She said to her mistress, “Would that my lord were with the prophet who is in Sama’ria! He would cure him of his leprosy.” 4 So Na’aman went in and told his lord, “Thus and so spoke the maiden from the land of Israel.” 5 And the king of Syria said, “Go now, and I will send a letter to the king of Israel.” So he went, taking with him ten talents of silver, six thousand shekels of gold, and ten festal garments. 6 And he brought the letter to the king of Israel, which read, “When this letter reaches you, know that I have sent to you Na’aman my servant, that you may cure him of his leprosy.” 7 And when the king of Israel read the letter, he rent his clothes and said, “Am I God, to kill and to make alive, that this man sends word to me to cure a man of his leprosy? Only consider, and see how he is seeking a quarrel with me.” 8 But when Eli’sha the man of God heard that the king of Israel had rent his clothes, he sent to the king, saying, “Why have you rent your clothes? Let him come now to me, that he may know that there is a prophet in Israel.” 9 So Na’aman came with his horses and chariots, and halted at the door of Eli’sha’s house. 10 And Eli’sha sent a messenger to him, saying, “Go and wash in the Jordan seven times, and your flesh shall be restored, and you shall be clean.” 11 But Na’aman was angry, and went away, saying, “Behold, I thought that he would surely come out to me, and stand, and call on the name of the LORD his God, and wave his hand over the place, and cure the leper. 12 Are not Aba’na and Pharpar, the rivers of Damascus, better than all the waters of Israel? Could I not wash in them, and be clean?” So he turned and went away in a rage. 13 But his servants came near and said to him, “My father, if the prophet had commanded you to do some great thing, would you not have done it? How much rather, then, when he says to you, `Wash, and be clean’?” 14 So he went down and dipped himself seven times in the Jordan, according to the word of the man of God; and his flesh was restored like the flesh of a little child, and he was clean. 15 Then he returned to the man of God, he and all his company, and he came and stood before him; and he said, “Behold, I know that there is no God in all the earth but in Israel; so accept now a present from your servant.”


24 And he said, “Truly, I say to you, no prophet is acceptable in his own country. 25 But in truth, I tell you, there were many widows in Israel in the days of Eli’jah, when the heaven was shut up three years and six months, when there came a great famine over all the land; 26 and Eli’jah was sent to none of them but only to Zar’ephath, in the land of Sidon, to a woman who was a widow. 27 And there were many lepers in Israel in the time of the prophet Eli’sha; and none of them was cleansed, but only Na’aman the Syrian.” 28 When they heard this, all in the synagogue were filled with wrath. 29 And they rose up and put him out of the city, and led him to the brow of the hill on which their city was built, that they might throw him down headlong. 30 But passing through the midst of them he went away.

Reflection for the day: “Crosses, contempt, sorrows and afflictions are the real treasures of the lovers of Jesus Christ crucified.” — St. Margaret Mary Alacoque