Saturday of the 5th Week in Ordinary Time 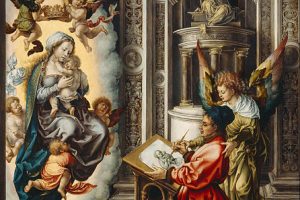 12:26 And Jerobo’am said in his heart, “Now the kingdom will turn back to the house of David; 27 if this people go up to offer sacrifices in the house of the LORD at Jerusalem, then the heart of this people will turn again to their lord, to Rehobo’am king of Judah, and they will kill me and return to Rehobo’am king of Judah.” 28 So the king took counsel, and made two calves of gold. And he said to the people, “You have gone up to Jerusalem long enough. Behold your gods, O Israel, who brought you up out of the land of Egypt.” 29 And he set one in Bethel, and the other he put in Dan. 30 And this thing became a sin, for the people went to the one at Bethel and to the other as far as Dan. 31 He also made houses on high places, and appointed priests from among all the people, who were not of the Levites. 32 And Jerobo’am appointed a feast on the fifteenth day of the eighth month like the feast that was in Judah, and he offered sacrifices upon the altar; so he did in Bethel, sacrificing to the calves that he had made. And he placed in Bethel the priests of the high places that he had made. 13:33 After this thing Jerobo’am did not turn from his evil way, but made priests for the high places again from among all the people; any who would, he consecrated to be priests of the high places. 34 And this thing became sin to the house of Jerobo’am, so as to cut it off and to destroy it from the face of the earth.

6 Both we and our fathers have sinned; we have committed iniquity, we have done wickedly. 7 Our fathers, when they were in Egypt, did not consider thy wonderful works; they did not remember the abundance of thy steadfast love, but rebelled against the Most High at the Red Sea. 19 They made a calf in Horeb and worshiped a molten image. 20 They exchanged the glory of God for the image of an ox that eats grass. 21 They forgot God, their Savior, who had done great things in Egypt, 22 wondrous works in the land of Ham, and terrible things by the Red Sea.

1 In those days, when again a great crowd had gathered, and they had nothing to eat, he called his disciples to him, and said to them, 2 “I have compassion on the crowd, because they have been with me now three days, and have nothing to eat; 3 and if I send them away hungry to their homes, they will faint on the way; and some of them have come a long way.” 4 And his disciples answered him, “How can one feed these men with bread here in the desert?” 5 And he asked them, “How many loaves have you?” They said, “Seven.” 6 And he commanded the crowd to sit down on the ground; and he took the seven loaves, and having given thanks he broke them and gave them to his disciples to set before the people; and they set them before the crowd. 7 And they had a few small fish; and having blessed them, he commanded that these also should be set before them. 8 And they ate, and were satisfied; and they took up the broken pieces left over, seven baskets full. 9 And there were about four thousand people. 10 And he sent them away; and immediately he got into the boat with his disciples, and went to the district of Dalmanu’tha.

Reflection for the day: “At the end of our life, we shall all be judged by charity.” — St. John of the Cross