Memorial of Saints Cyril and Methodius 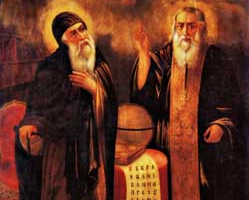 11:29 And at that time, when Jerobo’am went out of Jerusalem, the prophet Ahi’jah the Shi’lonite found him on the road. Now Ahi’jah had clad himself with a new garment; and the two of them were alone in the open country. 30 Then Ahi’jah laid hold of the new garment that was on him, and tore it into twelve pieces. 31 And he said to Jerobo’am, “Take for yourself ten pieces; for thus says the LORD, the God of Israel, `Behold, I am about to tear the kingdom from the hand of Solomon, and will give you ten tribes 32(but he shall have one tribe, for the sake of my servant David and for the sake of Jerusalem, the city which I have chosen out of all the tribes of Israel), 12:19 So Israel has been in rebellion against the house of David to this day.

9 There shall be no strange god among you; you shall not bow down to a foreign god. 10 I am the LORD your God, who brought you up out of the land of Egypt. Open your mouth wide, and I will fill it. 11 “But my people did not listen to my voice; Israel would have none of me. 12 So I gave them over to their stubborn hearts, to follow their own counsels. 13 O that my people would listen to me, that Israel would walk in my ways! 14 I would soon subdue their enemies, and turn my hand against their foes.

Reflection for the day: “We must show charity towards the sick, who are in greater need of help. Let us take them some small gift if they are poor, or, at least, let us go and wait on them and comfort them.” — St. Alphonsus Maria de Liguori