Thursday of the 5th Week in Ordinary Time 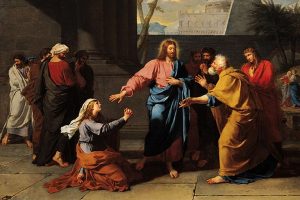 4 For when Solomon was old his wives turned away his heart after other gods; and his heart was not wholly true to the LORD his God, as was the heart of David his father. 5 For Solomon went after Ash’toreth the goddess of the Sido’nians, and after Milcom the abomination of the Ammonites. 6 So Solomon did what was evil in the sight of the LORD, and did not wholly follow the LORD, as David his father had done. 7 Then Solomon built a high place for Chemosh the abomination of Moab, and for Molech the abomination of the Ammonites, on the mountain east of Jerusalem. 8 And so he did for all his foreign wives, who burned incense and sacrificed to their gods. 9 And the LORD was angry with Solomon, because his heart had turned away from the LORD, the God of Israel, who had appeared to him twice, 10 and had commanded him concerning this thing, that he should not go after other gods; but he did not keep what the LORD commanded. 11 Therefore the LORD said to Solomon, “Since this has been your mind and you have not kept my covenant and my statutes which I have commanded you, I will surely tear the kingdom from you and will give it to your servant. 12 Yet for the sake of David your father I will not do it in your days, but I will tear it out of the hand of your son. 13 However I will not tear away all the kingdom; but I will give one tribe to your son, for the sake of David my servant and for the sake of Jerusalem which I have chosen.”

3 Blessed are they who observe justice, who do righteousness at all times! 4 Remember me, O LORD, when thou showest favor to thy people; help me when thou deliverest them; 35 but they mingled with the nations and learned to do as they did. 36 They served their idols, which became a snare to them. 37 They sacrificed their sons and their daughters to the demons; 40 Then the anger of the LORD was kindled against his people, and he abhorred his heritage.

24 And from there he arose and went away to the region of Tyre and Sidon. And he entered a house, and would not have any one know it; yet he could not be hid. 25 But immediately a woman, whose little daughter was possessed by an unclean spirit, heard of him, and came and fell down at his feet. 26 Now the woman was a Greek, a Syrophoeni’cian by birth. And she begged him to cast the demon out of her daughter. 27 And he said to her, “Let the children first be fed, for it is not right to take the children’s bread and throw it to the dogs.” 28 But she answered him, “Yes, Lord; yet even the dogs under the table eat the children’s crumbs.” 29 And he said to her, “For this saying you may go your way; the demon has left your daughter.” 30 And she went home, and found the child lying in bed, and the demon gone.

Reflection for the day: “We must pray without tiring, for the salvation of mankind does not depend on material success; nor on sciences that cloud the intellect. Neither does it depend on arms and human industries, but on Jesus alone.” — St. Frances Xavier Cabrini