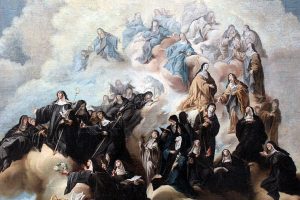 1 Then Solomon assembled the elders of Israel and all the heads of the tribes, the leaders of the fathers’ houses of the people of Israel, before King Solomon in Jerusalem, to bring up the ark of the covenant of the LORD out of the city of David, which is Zion. 2 And all the men of Israel assembled to King Solomon at the feast in the month Eth’anim, which is the seventh month. 3 And all the elders of Israel came, and the priests took up the ark. 4 And they brought up the ark of the LORD, the tent of meeting, and all the holy vessels that were in the tent; the priests and the Levites brought them up. 5 And King Solomon and all the congregation of Israel, who had assembled before him, were with him before the ark, sacrificing so many sheep and oxen that they could not be counted or numbered. 6 Then the priests brought the ark of the covenant of the LORD to its place, in the inner sanctuary of the house, in the most holy place, underneath the wings of the cherubim. 7 For the cherubim spread out their wings over the place of the ark, so that the cherubim made a covering above the ark and its poles. 9 There was nothing in the ark except the two tables of stone which Moses put there at Horeb, where the LORD made a covenant with the people of Israel, when they came out of the land of Egypt. 10 And when the priests came out of the holy place, a cloud filled the house of the LORD, 11 so that the priests could not stand to minister because of the cloud; for the glory of the LORD filled the house of the LORD. 12 Then Solomon said, “The LORD has set the sun in the heavens, but has said that he would dwell in thick darkness. 13 I have built thee an exalted house, a place for thee to dwell in for ever.”

6 Lo, we heard of it in Eph’rathah, we found it in the fields of Ja’ar. 7 “Let us go to his dwelling place; let us worship at his footstool!” 8 Arise, O LORD, and go to thy resting place, thou and the ark of thy might. 9 Let thy priests be clothed with righteousness, and let thy saints shout for joy. 10 For thy servant David’s sake do not turn away the face of thy anointed one.

53 And when they had crossed over, they came to land at Gennes’aret, and moored to the shore. 54 And when they got out of the boat, immediately the people recognized him, 55 and ran about the whole neighborhood and began to bring sick people on their pallets to any place where they heard he was. 56 And wherever he came, in villages, cities, or country, they laid the sick in the market places, and besought him that they might touch even the fringe of his garment; and as many as touched it were made well.

Reflection for the day: “If men knew the peace good Religious enjoy, the whole world would become a monastery.” — St. Scholastica