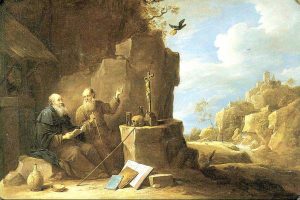 4 Then all the elders of Israel gathered together and came to Samuel at Ramah, 5 and said to him, “Behold, you are old and your sons do not walk in your ways; now appoint for us a king to govern us like all the nations.” 6 But the thing displeased Samuel when they said, “Give us a king to govern us.” And Samuel prayed to the LORD. 7 And the LORD said to Samuel, “Hearken to the voice of the people in all that they say to you; for they have not rejected you, but they have rejected me from being king over them. 10 So Samuel told all the words of the LORD to the people who were asking a king from him. 11 He said, “These will be the ways of the king who will reign over you: he will take your sons and appoint them to his chariots and to be his horsemen, and to run before his chariots; 12 and he will appoint for himself commanders of thousands and commanders of fifties, and some to plow his ground and to reap his harvest, and to make his implements of war and the equipment of his chariots. 13 He will take your daughters to be perfumers and cooks and bakers. 14 He will take the best of your fields and vineyards and olive orchards and give them to his servants. 15 He will take the tenth of your grain and of your vineyards and give it to his officers and to his servants. 16 He will take your menservants and maidservants, and the best of your cattle and your asses, and put them to his work. 17 He will take the tenth of your flocks, and you shall be his slaves. 18 And in that day you will cry out because of your king, whom you have chosen for yourselves; but the LORD will not answer you in that day.” 19 But the people refused to listen to the voice of Samuel; and they said, “No! but we will have a king over us, 20 that we also may be like all the nations, and that our king may govern us and go out before us and fight our battles.” 21 And when Samuel had heard all the words of the people, he repeated them in the ears of the LORD. 22 And the LORD said to Samuel, “Hearken to their voice, and make them a king.” Samuel then said to the men of Israel, “Go every man to his city.”

15 Blessed are the people who know the festal shout, who walk, O LORD, in the light of thy countenance, 16 who exult in thy name all the day, and extol thy righteousness. 17 For thou art the glory of their strength; by thy favor our horn is exalted. 18 For our shield belongs to the LORD, our king to the Holy One of Israel.

1 And when he returned to Caper’na-um after some days, it was reported that he was at home. 2 And many were gathered together, so that there was no longer room for them, not even about the door; and he was preaching the word to them. 3 And they came, bringing to him a paralytic carried by four men. 4 And when they could not get near him because of the crowd, they removed the roof above him; and when they had made an opening, they let down the pallet on which the paralytic lay. 5 And when Jesus saw their faith, he said to the paralytic, “My son, your sins are forgiven.” 6 Now some of the scribes were sitting there, questioning in their hearts, 7 “Why does this man speak thus? It is blasphemy! Who can forgive sins but God alone?” 8 And immediately Jesus, perceiving in his spirit that they thus questioned within themselves, said to them, “Why do you question thus in your hearts? 9 Which is easier, to say to the paralytic, `Your sins are forgiven,’ or to say, `Rise, take up your pallet and walk’? 10 But that you may know that the Son of man has authority on earth to forgive sins” — he said to the paralytic — 11 “I say to you, rise, take up your pallet and go home.” 12 And he rose, and immediately took up the pallet and went out before them all; so that they were all amazed and glorified God, saying, “We never saw anything like this!”

Reflection for the day: “Obedience is a penance of reason, and, on that account, a sacrifice more acceptable than all corporal penances and mortifications.” — St. John of the Cross