Thursday of the 1st Week in Ordinary Time 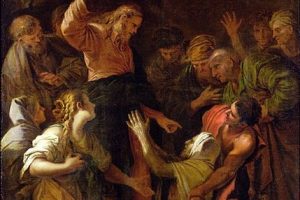 
40 And a leper came to him beseeching him, and kneeling said to him, “If you will, you can make me clean.” 41 Moved with pity, he stretched out his hand and touched him, and said to him, “I will; be clean.” 42 And immediately the leprosy left him, and he was made clean. 43 And he sternly charged him, and sent him away at once, 44 and said to him, “See that you say nothing to any one; but go, show yourself to the priest, and offer for your cleansing what Moses commanded, for a proof to the people.” 45 But he went out and began to talk freely about it, and to spread the news, so that Jesus could no longer openly enter a town, but was out in the country; and people came to him from every quarter.

Reflection for the day: “The greater the charity of the Saints in their heavenly home, the more they intercede for those who are still on their journey and the more they can help them by their prayers; the more they are united with God, the more effective those prayers are. This is in accordance with Divine order, which makes higher things react upon lower things, like the brightness of the sun filling the atmosphere.” — St. Thomas Aquinas