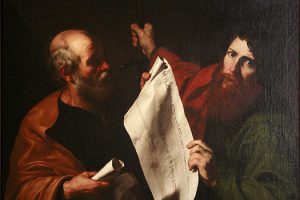 11 After three months we set sail in a ship which had wintered in the island, a ship of Alexandria, with the Twin Brothers as figurehead. 12 Putting in at Syracuse, we stayed there for three days. 13 And from there we made a circuit and arrived at Rhe’gium; and after one day a south wind sprang up, and on the second day we came to Pute’oli. 14 There we found brethren, and were invited to stay with them for seven days. And so we came to Rome. 15 And the brethren there, when they heard of us, came as far as the Forum of Ap’pius and Three Taverns to meet us. On seeing them Paul thanked God and took courage. 16 And when we came into Rome, Paul was allowed to stay by himself, with the soldier that guarded him. 30 And he lived there two whole years at his own expense, and welcomed all who came to him, 31 preaching the kingdom of God and teaching about the Lord Jesus Christ quite openly and unhindered.

1 O sing to the LORD a new song, for he has done marvelous things! His right hand and his holy arm have gotten him victory. 2 The LORD has made known his victory, he has revealed his vindication in the sight of the nations. 3 He has remembered his steadfast love and faithfulness to the house of Israel. All the ends of the earth have seen the victory of our God. 4 Make a joyful noise to the LORD, all the earth; break forth into joyous song and sing praises! 5 Sing praises to the LORD with the lyre, with the lyre and the sound of melody! 6 With trumpets and the sound of the horn make a joyful noise before the King, the LORD!

22 Then he made the disciples get into the boat and go before him to the other side, while he dismissed the crowds. 23 And after he had dismissed the crowds, he went up on the mountain by himself to pray. When evening came, he was there alone, 24 but the boat by this time was many furlongs distant from the land, beaten by the waves; for the wind was against them. 25 And in the fourth watch of the night he came to them, walking on the sea. 26 But when the disciples saw him walking on the sea, they were terrified, saying, “It is a ghost!” And they cried out for fear. 27 But immediately he spoke to them, saying, “Take heart, it is I; have no fear.” 28 And Peter answered him, “Lord, if it is you, bid me come to you on the water.” 29 He said, “Come.” So Peter got out of the boat and walked on the water and came to Jesus; 30 but when he saw the wind, he was afraid, and beginning to sink he cried out, “Lord, save me.” 31 Jesus immediately reached out his hand and caught him, saying to him, “O man of little faith, why did you doubt?” 32 And when they got into the boat, the wind ceased. 33 And those in the boat worshiped him, saying, “Truly you are the Son of God.”

Reflection for the day: O unfathomable depth! O Deity eternal! O deep ocean! What more could You give me than to give me Yourself? You are an ever-burning Fire; You consume and are not consumed. By Your fire, You consume every trace of self-love in the soul. You are a Fire which drives away all coldness and illumines minds with its light, and with this light You have made known Your truth. Truly this light is a sea which feeds the soul until it is all immersed in You, O peaceful Sea, eternal Trinity! The water of this sea is never turbid; it never causes fear, but gives knowledge of the truth. This water is transparent and discloses hidden things; and a living faith gives such abundance of light that the soul almost attains to certitude in what it believes. — St. Catherine of Siena