Tuesday of the 27th Week in Ordinary Time 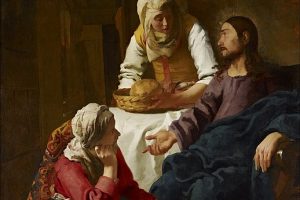 1 Out of the depths I cry to thee, O LORD! 2 Lord, hear my voice! Let thy ears be attentive to the voice of my supplications! 3 If thou, O LORD, shouldst mark iniquities, Lord, who could stand? 4 But there is forgiveness with thee, that thou mayest be feared. 7 O Israel, hope in the LORD! For with the LORD there is steadfast love, and with him is plenteous redemption. 8 And he will redeem Israel from all his iniquities.

38 Now as they went on their way, he entered a village; and a woman named Martha received him into her house. 39 And she had a sister called Mary, who sat at the Lord’s feet and listened to his teaching. 40 But Martha was distracted with much serving; and she went to him and said, “Lord, do you not care that my sister has left me to serve alone? Tell her then to help me.” 41 But the Lord answered her, “Martha, Martha, you are anxious and troubled about many things; 42 one thing is needful. Mary has chosen the good portion, which shall not be taken away from her.”

Reflection for the day: “He who avoids prayer is avoiding everything that is good.” — St. John of the Cross