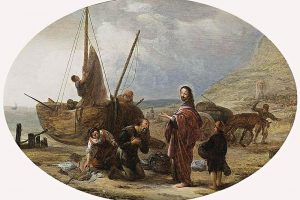 
6 As therefore you received Christ Jesus the Lord, so live in him, 7 rooted and built up in him and established in the faith, just as you were taught, abounding in thanksgiving. 8 See to it that no one makes a prey of you by philosophy and empty deceit, according to human tradition, according to the elemental spirits of the universe, and not according to Christ. 9 For in him the whole fulness of deity dwells bodily, 10 and you have come to fulness of life in him, who is the head of all rule and authority. 11 In him also you were circumcised with a circumcision made without hands, by putting off the body of flesh in the circumcision of Christ; 12 and you were buried with him in baptism, in which you were also raised with him through faith in the working of God, who raised him from the dead. 13 And you, who were dead in trespasses and the uncircumcision of your flesh, God made alive together with him, having forgiven us all our trespasses, 14 having canceled the bond which stood against us with its legal demands; this he set aside, nailing it to the cross. 15 He disarmed the principalities and powers and made a public example of them, triumphing over them in him.


1 I will extol thee, my God and King, and bless thy name for ever and ever. 2 Every day I will bless thee, and praise thy name for ever and ever. 8 The LORD is gracious and merciful, slow to anger and abounding in steadfast love. 9 The LORD is good to all, and his compassion is over all that he has made. 10 All thy works shall give thanks to thee, O LORD, and all thy saints shall bless thee! 11 They shall speak of the glory of thy kingdom, and tell of thy power,

Reflection for the day: “Our Lord loves you and loves you tenderly; and if He does not let you feel the sweetness of His love, it is to make you more humble and abject in your own eyes.” — St. Pio of Pietrelcina