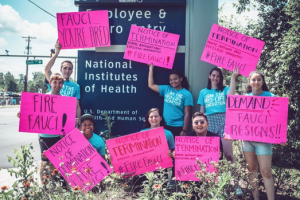 BETHESDA, M.D., and WASHINGTON, D.C. (06-10-2021) – Today, Students for Life and pro-life allies rallied to demand that Dr. Anthony Fauci be fired amidst the aborted infant experimentation scandal his office funded.

In her speech, Stephanie Stone stated:

“Dr. Fauci, as the director of the National Institute of Allergy and Infectious Disease (the NIAID), has allowed federal tax dollars to fund what should be considered a criminal act that is currently taking place at the University of Pittsburgh. Right now, medical researchers at UPitt are undergoing a series of tests that, frankly, it’s even hard to talk about. These tests involve taking the scalps of 5-month-old aborted children and grafting them on to the backs of lab mice. Researchers then observed as the rats and mice grew HUMAN baby hairs. This is an insane misuse of not only taxpayer dollars, but an absolutely abhorrent waste of precious human lives.

“Why does this slip under the radar? Why aren’t more people talking about this? Why are we turning a blind eye as a society to this inhumane injustice going on right under our noses? Medical research should never — let me repeat — never exist at the cost of LIVES, and most especially, no one should be forced to PAY for it. It’s shameful that this office has seen fit to put their stamp of approval on this project; let alone using taxpayer money to do it!”

In a recent interview with The Stream, SFLA/SFLAction President Kristan Hawkins remarked:

“This all matters because it signals that the scientific world is [turning] a blind eye to what happens to human beings in a lab. We can expect more pre-born babies to suffer and die to satisfy someone’s curiosity… For many new voters today, abortion is a human rights issue, treating innocent life as a commodity. Treating a human child worse than we would treat an animal is clearly wrong.

Following the rally, Students for Life and Students for Life Action met with Senator Mike Braun (R—IN), who recently joined with Sen. Daines and Sen. Lankford to introduce an amendment outlawing the creation of animal-human hybrid organisms.

“Human life is distinct and sacred,” said Senator Braun, “and research that creates an animal-human hybrid or transfers a human embryo into an animal womb or vice versa should be completely prohibited and engaging in such unethical experiments should be a crime.

SFLA/SFLAction staff were grateful for the opportunity to meet with Senator Braun to discuss pro-life concerns with Dr. Fauci and encourage continued legislative action on the unconscionable research on preborn lives taking place in the United States.

Just this week leading up to today’s rally, Students for Life collected nearly 20,000 petitions from concerned Americans calling for Dr. Fauci to be fired amidst this infant research scandal.