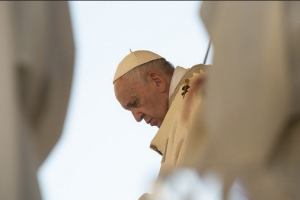 CNA—Pope Francis has described it as an “incoherence” that President Joe Biden, a Catholic, is in favor of legal abortion.

During an interview with Univisión and Televisa broadcast July 12, 2022, Pope Francis spoke about abortion and Biden’s position, after being asked about whether to admit politicians who promote legal abortion to Holy Communion.

The Holy Father affirmed that there is scientific data that show that “a month after conception, the DNA of the fetus is already there and the organs are aligned. There is human life.”

“Is it just to eliminate a human life?” he then asked.

As for the defense of abortion by the U.S. president, Pope Francis stated that he leaves it to Biden’s “conscience.”

“Let (Biden) talk to his pastor about that incoherence,” the pope said.

Though a Catholic, Biden has repeatedly supported abortion rights despite the Church’s teaching that human life must be respected and protected from the moment of conception.

Last week Biden signed an executive order aimed at protecting the ongoing killing of unborn infants by abortion. This executive order was issued in response to the Supreme Court’s decision to overturn Roe v. Wade, thus ending legalized abortion throughout the United States.

The president called it “a moment to restore the rights that have been taken away from us, and the moment to protect our nation from an extremist agenda that is antithetical to everything we believe as Americans.”

We at Catholic Business Journal fail to understand how stopping the killing of innocent unborn human beings could even remotely be considered “extremist.”

Further, Biden’s assertion that NOT killing innocent infants in the womb is “antithetical to everything we believe as Americans,” does not make any sense.  After all, our American Declaration of Independence states that we, as Americans, declare as unalienable rights, granted to all humans by their Creator, “Life, Liberty and the pursuit of Happiness.”  Note that “LIFE” is first on the list!

In September 2021, Biden said he did not “agree” that life begins at conception.

“I have been and continue to be a strong supporter of Roe v. Wade,” Biden said at the White House, answering a reporter’s question on abortion. “I respect them—those who believe life begins at the moment of conception and all—I respect that. Don’t agree, but I respect that,” he said.

Cardinal Wilton Gregory of Washington commented shortly afterward that “The Catholic Church teaches, and has taught, that life — human life — begins at conception. So, the president is not demonstrating Catholic teaching.”